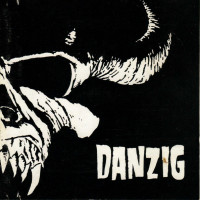 It happens a couple times a year around the Punknews HQ. I get the opportunity to review one of my all time favorite records. I always jump at the chance, and usually regret it at some point. When the time finally comes to put my thoughts into words, the reality of the situation hits me. I’m supposed to be analyzing a record that’s at least 20 years old. It’s probably already been picked apart and written about by people much smarter than me. What could I possibly add to the conversation? Anyway, I’m not one to back out of a commitment, so here goes nothing...

In 1988, I was a 15 year old skater kid. I had a paper route and a little bit of spending money. I couldn’t wait to tag along with my mom once a month on a trip to the grocery store. Why, you ask? To pick up the new issue of Thrasher Magazine. By 1988, it had become one of my favorite sources for discovering new music. This is where I first came across Danzig. I had been hanging out at a local halfpipe, and my favorite bands to shred to were Suicidal Tendencies, DRI, Dead Milkmen, Dead Kennedys and of course, the Misfits. All I knew about Danzig was that it was the dude from the Misfits.

I bought Danzig without the benefit of hearing it, and it was definitely not what I expected. Where was the speed? Where were the violent cartoon lyrics? Still, after only a spin or two I was hooked. Thirty years later, I’m still hooked. That original lineup of Glenn Danzig on vocals, John Christ on guitar, Eerie Von on bass and Chuck Biscuits on drums was really something special. While the band has done lots of good things since, they were never able to recapture the magic of those four guys on the first three records.

GD was originally scouted by a young, up-and-coming producer named Rick Rubin while he was still fronting Samhain. Rubin wanted him to put together an eponymous group for his new label. Danzig ended up being the first release on Def American Records (later American Recordings). It says a lot about Rubin that a guy who cut his teeth producing hip hop was so deftly able to handle heavy stuff. Nowadays, Rubin is among the biggest producers in the world. His early work with Danzig and Slayer is what really put him on the map.

Almost all of the songs from Danzig were undisputable classics. “Twist of Cain” started things off with one of the greatest riffs ever. It actually twisted. It introduced the world to a bluesy style of goth metal that was fresh but also somehow familiar. It was bold and genre defying. GD’s big voice was finally allowed to take center stage. “Not of This World” harkened back to GD’s earlier days lyrically, but not musically. “She Rides” had a dark sexual energy. (There was a time when “She Rides” mingled freely with songs like “Cherry Pie” and “Dr. Feelgood” on strip joint playlists.) GD had never shied away from the topic of sex, but this was the first time the music matched the words. “Am I Demon” closed the first side and was the heaviest song on the album. It remains a fan favorite.

The second side opened with “Mother”, the band’s most recognizable song. Everyone knew it was a standout at the time, but it wouldn’t become a hit until 1994 when it appeared on the Thrall:Demonsweatlive EP. It eventually made it into the mainstream rock charts. Not bad for a song with such suggestive and subversive subject matter. “Possession” was one of the catchiest tunes Danzig ever came up with. Even the album tracks on Danzig were amazing. “Soul on Fire”, “End of Time”, “The Hunter” and “Evil Thing” have all stood the test of time. It was 41 minutes of perfection. That wouldn’t be the case with most of Danzig’s later releases.

That’s all fine and good you’re saying, but what does this have to with Misfits week? Well, Glenn Danzig. If you look at GD’s entire career, you can see the natural progression from the Misfits to Danzig. It was a fascinating ten year journey with a Samhain detour in the middle. Both bands share his booming baritone and dark imagery. He clearly took what he learned in the Misfits and used it in the band that bears his name. The Danzig skull is nearly as recognizable as the Misfits skull. You’d be hard pressed to name someone who’s been as influential to both punk and metal as GD. In conclusion, I hope you learned a thing or two about Danzig. If not, at least you know I used to have a paper route.