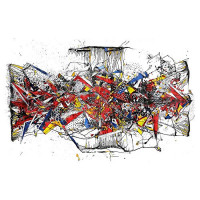 Among the pantheon of the underground music, there are few bands as polarizing as mewithoutYou.

The Philadelphia-based quintet has always elicited strong opinions. Those that hate them find them entirely unlistenable. Those that love them adore them with a religious fervor.

But unlike most bands bearing the "love-'em-or-hate-'em" tag, much of mewithoutYou's polarization happens within their own fanbase. Throughout their eighteen-year tenure, their discography has shifted between chaotic hardcore and quirky folk-punk.

That's not the most natural blend of genres, but in the case of mewithoutYou, it makes sense. Esoteric lead singer Aaron Weiss has famously said that he doesn't listen to heavy music (rumor has it that the group started as a joke). He's a much bigger fan of artists like Neutral Milk Hotel and Bob Dylan, which he emulated fully on it's all crazy! it's all false! it's all a dream! it's alright, their scream-less fourth album that I'm convinced was supposed to be an Aaron Weiss solo project. Strangely enough, it's all crazy! seems to be the album that gained them the most fans, which is just a recipe for disappointment.

Since that record, the group has tried to reconcile the two extremes of their sound without fully indulging in either. Ten Stories largely returned to the freeform indie rock of their third album, Brother, Sister while retaining much of it's all crazy's folksiness.

2016's Pale Horses found the band joining the roster of post-hardcore imprint Run For Cover and employing famed emo-revival producer Will Yip. The record was a hard-hitting tour-de-force that recaptured the urgency of their 2004 masterpiece Catch For Us the Foxes. Coincidentally, shortly before Pale Horses, the group did a tenth-anniversary tour of Foxes, which seemed to inform much of the new record's sound.

Similarly, last year the group embarked on a tour called [A-->B] Live, which found them playing through their debut full-length. And listening to [Untitled], it seems like revisiting that material reminded them of a few things about themselves.

While it's not a complete retread of old material, [Untitled] is the most fiery and furious record they've made in years. "9:27am, 7/29" kicks off the record with Aaron's most violent vocal performance since [A-->B] Life. "Another Head for Hydra," "Flea, Thou Matadors!" and "Wendy and Betsy" are all similarly punky, even without constant shouting. "Michael Row Your Boat Ashore" is one of the heaviest songs they've ever done.

But it isn't all scorched-earth hardcore heaviness. Despite a thick sludge metal atmosphere, "Julia" finds Aaron at his most delicate. "[dormouse sighs]" and "Tortoises All the Way Down" are heavily melodic, but there's a sparse sorrow to them that seem to exist in the wasteland that was left after the apocalypse that Pale Horses prophesied. The humorously titled "Break On Through (To the Other Side), Pt. II" closes the disc with a sorrowful moment of acoustic meditation like a long sigh after an explosion.

As always, Aaron's lyrics are eloquent and cryptic, drawing from various spiritual traditions as he plumbs the depths of his soul with an almost uncomfortable intimacy. He inserts himself into Biblical narratives and historical events to navigate his own relationships and neuroses. Like Ten Stories and Pale Horses, the references are too dense to understand without a deep dive into an annotated lyric sheet, which I intend to do as soon as Genius.com gets to it.

I can't say for sure whether [Untitled] be the record that finally brings all mewithoutYou listeners together. In fact, I'm almost certain that it won't. People are already complaining about the singles on Reddit. But if nothing else, it proves that after nearly two decades, mewithoutYou has one of the most unique voices in the whole scene. And they still have plenty to say.