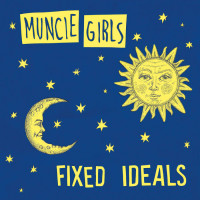 I was pretty stoked to hear Muncie Girls' sophomore record after loving what they did on From Caplan to Belsize. That was an indie-punk gem that I felt flew a bit too under the radar. Over the years though, the buzz has picked up and here we are with Fixed Ideals. Is it as edgy or hard-hitting as their debut full-length? Sadly, no. But, this record represents a snarky, catchy piece of indie/alt. rock I can see taking college radio by storm and building the band's name up even more.

Now don't get me wrong. It's a solid album. But it's a bit more poppy than I expected. If it went a bit more indie or punk I think I'd be raving more, but as it stands Fixed Ideals feels like a grower. The songs I love, I really do love, but some jams feel a bit by-the-numbers. It's sonically all over the place too which makes it kinda hard to pin down with bits and pieces taken from bands like RVIVR, Laura Stevenson, Kamikaze Girls and even, Menzingers. Vocalist Lande Hekt, though, really brings a sound around that feels similar to Slingshot Dakota, which you get off the cuff with songs like "Clinic", "Fig Tree" and "Laugh Again".

"Isn't Life Funny", "Family of Four" and the acoustic-driven "Hangovers" are the songs, however, I feel which produce a bit more of the band's identity and true voice. That said, it's a nice combination and it's really intriguing hearing the Exeter outfit wax on about romance, politics (especially with a European perspective) and of course, mental health. These deep lyrics mixed into saccharine, bubbly pop melodies add a unique contrast to a band whose dynamic I've always been fascinated with. All in all, a decent enough follow-up but I do hope they get rougher, louder and angrier next time around -- I can see that skin being worn so well by them.

The Pinheads/Billy Liar: Live at The Tusk