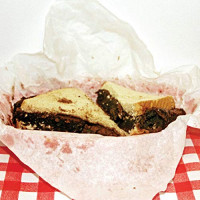 It’s turning to a redundant cliché, but 2018 may prove to be Ty Segall’s most productive year to date. The first quarter saw the release of the excellent genre fusion of Freedom’s Goblin. Following close behind was the collaborative album with White Fence (Joy) and the second album by caustic deconstructionists GOGGS (Pre Strike Sweep). Now, for our listening pleasure is a covers album; the decadently titled Fudge Sandwich (which boasts some truly appetizing album art). However, the man is not done for the year! At an art gallery showing for his work entitled Orange Rainbow, Segall also released a limited 55 run of cassettes with the same name. Also, he has yet another collaborative album (following another cassette only EP release); this time with his wife Denee Segall and Emmett Kelly under the moniker The C.I.A. with the eponymous album due in December on In the Red. That’s six albums this year, folks.

Fudge Sandwich is an unsurprisingly eclectic collections of covers bent to Segall’s maniacal garage aesthetic. The set begins with a demented, narcotized take on War’s cruising anthem “Low Rider.” Adding some delirious synth lines and some tightrope guitars, Segall ominously invites the listener to take a trip that sounds more sinister than laid back. Next, Segall offers a faithful, if delightfully more unhinged, version of Spencer Davis Group’s “I’m a Man.” Other faithful adaptations in this oeuvre include German Krautrock pioneers Amon Duul II’s pounding “Archangel Thunderbird” and Rudimentary Peni’s vitriolic “Rotten to the Core” (a direct hit on Johnny Rotten and Joe Strummer) from 1983’s Death Church LP.

One theme that seems to reprise itself across Fudge Sandwich is division and solitude. John Lennon’s despondent “Isolation” laments his attempts to bring some new perspective to the world as being ultimately alienating. Segall trades Lennon’s introductory piano for a sludgy guitar riff that interestingly recalls Zeppelin’s “Kashmir.” The Dils punk rager “Class War” is transformed to a folky, San Francisco Summer of Love acoustic protest ballad that displays some hardy malleability despite the sonic rearrangement. Segall transforms international progressive rock band Gong’s “Pretty Miss Titty” into an Elliott Smith / Beatles-style weeper of the plight of neglected sex workers at the hands of indifferent “big bad business[men].” Segall amplifies Neil Young’s foreboding tale of “The Loner” into a looming threat with barreling distortion and a galloping beat. Finally, he accentuates the original mood of Sparks’ “Slowboat” with creepy Willy Wonka boatride guitars as an elegy for an abandoned lover who promises to “come back another day” despite knowing that the object of affection “won’t come near [him].”

Despite the occasional detour into somber territory, Fudge Sandwich still finds plenty of time to groove with the aforementioned “Archangel Thunderbird” and the berserk reinterpretation of Funkadelic’s Maggot Brain cut “Hit It and Quit It.” Segall’s cover selection should hopefully send you to Spotify and YouTube to dredge up the originals and dig deeper into each of these artists’ repertoire. Fudge Sandwich ultimately leaves us looking forward to what Segall has in store for the rest of 2018 and beyond.

The Pinheads/Billy Liar: Live at The Tusk