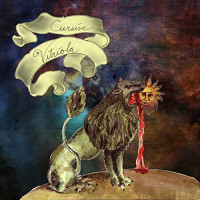 “I’m at my best when I’m at my worst,” Tim Kasher declared on 2009’s “From the Hips.” On Vitriola, Cursive’s first album in six years, he proves himself right.

Cursive is also at their best when they have stakes and focus in their own artistic expression: Domestica with divorce, Happy Hollow with religion and The Ugly Organ with art itself. These albums have been Cursive’s biggest and most resonant statements. 2012’s I Am Gemini, while themed, struggled with the urgency. Now, like many in 2018, Cursive has a lot they’re upset about and Vitriola, in name and execution reflects this. On opener “Free To Be or Not To Be You and Me,” Kasher sings, “I’m pissed, I feel cursed with life, I can’t just exist!” On “Pick Up the Pieces,” “So this is it, the world just fell to shit.” Track three is simply called “It’s Gonna Hurt.” Kasher has never been one to hold his feelings back, but here, he’s angry and wants you to know it.

Kasher has many outlets for his music – he’s released two solo and one Good Life album since the last Cursive record. But Cursive was clearly the correct fit for 2018’s emotional turbulence. Original drummer Clint Schnase is back and hasn’t missed a beat. Always reliable for dissonant aggression, Ted Stevens and Matt Maginn, pound away on their respective instruments, creating a sound so uniquely Cursive. And welcome cellist Megan Seibe, who can calm the waters but is best utilized for added hostility, like on “Pick Up the Pieces.”

While other songs have more replay value, “Ouroboros,” is the defining Cursive track here. Between Kasher’s “the writer” references and the bridge which includes the gem, “I am a parasite, I am a shill, I am that lowly snake, chasing its tail,” this is Cursive firing on all cylinders. The music is harsh, in your face – the band berates society, themselves, everything. They want you to feel the discomfort they feel and the result is their best work in years.

Vitriola is depressing with nary any hope. The answers to questions like, “How do we fix this?” or “What’s the solution?” are not here. Cursive has made an uneasy record for their fans that may be too on the nose, which is clearly the intention.

All Get Out: No Bouquet