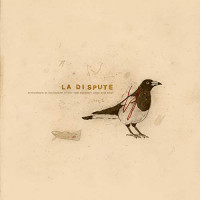 La Dispute was one of the bands in the late 2000s-into-this-decade that helped push the Wave, a group of emo-revivalist bands that played punk, pop-punk, screamo and post-hardcore, whether as a mix or independently. Known for their spoken-word/poetry, vocalist Jordan Dreyer often came in for flak for not being able to sing well, but being a Thursday fan and all, it didn't matter to me. LD pushed out quite a few heartfelt records, powerfully written to the point they felt like therapy, that really grabbed me heart and soul. With the remastering of Somewhere at the Bottom of the River Between Vega and Altair for their 10th anniversary, it's a lovely nostalgic trip for fans like me with a record that really stands tall as a work of art.

LD went back to No Sleep Records who took chances on them, as well as bands like Touche Amore (who's also celebrating a decade together playing shows and putting out records). Will Yip, known for his work on bands like Title Fight, Balance and Composure and such, is at the engineering helm here, adding more depth, textures and a coat of polish to the record, brining out the ambiance and atmosphere not just in terms of grunge like he does with Citizen, Turnover and such, but in terms of intricate guitar-driven traits. He cleans it up so the instruments pop more, whether it's poppy, math-riffy, or post-rock, all of which are on this album. Just see "Castle Builders."

But it's on songs like "New Songs for Old Lovers", "Andria", "Sad Prayers", "Damaged Goods" and "The Last Lost Continent" you can feel everything come to the fore music-wise. Dreyer's vocals are pushed back, but not to the point its muted, and the picking, the drums, everything sounds tighter and crisper, given the music more character. Before the mix was overpowered by the vocals, emotional, straining and breaking, but that was just their style. Now the production on songs like "Said the King...", "Such Small Hands" and "Nobody, Not Even The Rain" feel a lot more balanced and help create the aura of a musical novel.

That said, this wasn't necessary. It's just a nice gesture. The original version is perfect as is. But this remastering is a welcome treat and I can't wait to hear what LD do with their next record on Epitaph, and how Yip (I presume) will guide the ship as a follow-up to Rooms of the House. I'd give this a half-star extra if an extra track, something unreleased or a new song were on it, but hey, let me be grateful for this and not selfish and make demands.

Laura Jane Grace and the Devouring Mothers: Bought to Rot

Suede Razors: All the Hits and Misses