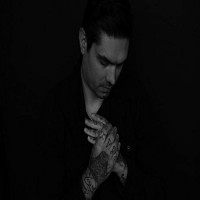 Spirit Houses is the brainchild of Mikey Ireland of Pass Away and I Am the Avalanche. Unlike those punkier bands, Spirit Houses is an acoustic venture for Ireland. Two Passing Ships, his debut record as Spirit Houses, offers a dynamic acoustic rock n roll record that shows Ireland’s impressive dexterity as a musician.

The record drips with an introspective and subdued but bitingly honest tone. Ireland manages to create a wonderful balance between understated music and existentially critical lyrical content. The product is a seven-song record whose melodious sound carefully holsters otherwise antagonistically painful lyrics.

The record’s fourth song, “Perfect Irish Stout,” stands out as an acoustic piece sung and played with the power of a punk song. The guitar riffs call upon the folksy sound of William Elliot Whitmore while Ireland’s vocal stylings here follow a simple but catchy cadence. The song’s brevity, clocking in at under two minutes, and the references to Tom Petty, The Pogues, and NoFX give it a certain romantic novelty.

“Nightmares Every Night,” the record’s opener does well in showcasing Ireland’s vision for Spirit Houses as more than just a one-person acoustic project. As the song moves along the gentle organ accents, guitar layers, and soft drumming create a much bigger atmosphere that really allows Ireland’s vocals to flourish. The simple but catchy chorus, with just enough vocal layering, is undeniably well-written and is about as radio friendly as it gets. What’s great about the song though is that, despite its accessibility, it does not come across as at all contrived or calculated. It’s just really damn good.

The record’s closer, “An Open Letter to My Future Self,” is another strong offering. Another track that brings in multiple guitar tracks and drumming, this song best captures that subdued but bitingly honest tone. The lyrics on this one are reflective in a painful but relatable way. And the electric guitar tracks are wonderful complements to the acoustics. There’s an eerie mood captured on this song that is only made stronger by the song closing out the record.

What we have on Two Passing Ships is music from a musician who’s grown within the punk underground but who also has something more to offer us. The record is wonderful. I simply don’t know how else to describe it. The songs just feel so genuine and candid that one can’t help but feel as though Ireland is in the room with you while listening. If you like a diverse palette of music, Two Passing Ships is not to be missed. You’ll feel the punk vibes, but you’ll appreciate the song writing and musicianship apart from that as well.