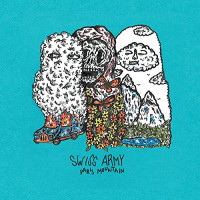 I always enjoy stumbling onto new music by accident. As was the case with Pittsburgh’s Swiss Army, when I quite literally stumbled into the venue they happened to be playing with no prior knowledge of the band. I continued to be pleasantly surprised when a solid recorded offering titled Paris Mountain followed up the band’s engaging live performance.

Swiss Army’s overall vibe can be generalized as a punk rock band, but the mid tempo rock beats (an apparent nod to 90’s alternative rock) and metal tinged guitar leads leave a unique feel. The band finds stylistic comfort somewhere in-between the flair of older Say Anything and the anthemic rock feel of Weezer, with an obvious dash of Dashboard Confessional infused emo.

The most attention grabbing part of Swiss Army is the engaging guitar leads, often breaking up heavy and layered rock riffs. A great example of the guitar interplay comes from album opener “Loved Ones”. The guitar leads have a metal edge that accents the bouncy rhythm riffs nicely. Some may argue with me, but the guitar lead in this song brings Ride The Lightning to mind, the context is significantly different, but the feel remains. The vocals are memorable and catchy, and primarily where the Say Anything influences come into play. The songs are an appropriate length, and flow nicely from track to track. I always appreciate when a band speeds things up, which unfortunately doesn’t happen on Paris Mountain. That being said, the metallic guitar leads keep the mid-tempo pace from becoming monotonous.

Paris Mountain is an upbeat rock and roll based punk rock record. Swiss Army is a band that could draw in a wide array of fans from across the punk rock and alternative music spectrum. That being said, the band will likely find themselves in a position choosing between continuing with the punk rock influence or fully embracing the alternative rock vibe. I am curious to see which way they decide to go with future releases.