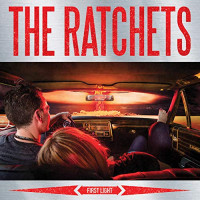 It’s been 12 long years since The Ratchets’ debut LP, Glory Bound. In the ensuing decade plus, other bands (I’m looking at you Gaslight Anthem) have had a great deal of success with a similar sound. 2018 seems like as good a time as any for The Ratchets to reclaim their proper place in the New Jersey landscape. Their sound is steeped in old time rock and roll and Americana. (Think Social Distortion or the Stray Cats.) It’s the punk of The Clash informed by classic country and maybe even a hint of gospel. There is also the undeniable influence of the great songwriters from the last generation. People like Tom Petty, John Mellencamp, Billy Joel, Bob Seger, and of course, Bruce Springsteen.

The opening track of First Light, “Gotta Be Cool”, is a loving tribute to all things rock and roll. The lyrics “Oh I remember rock and roll/The way it seeped into our bones” and “Like posters on our bedroom walls/We took ‘em down but they left a mark” sum it up better than I could. On the more political songs like “Drone Control”, “Dotard at the Dial”, “World Trade Lungs”, “Fiscal Spliff” and “War Office No.9”, Ratchets frontman Jed Engine channels his inner Joe Strummer. While those are impossibly big shoes to fill, Engine does an admirable job. Others like “Bad Vibes”, “2-4-6-8 Motorway” and “Stray Emotions” are straight up rockers with catchy choruses and melodic lead guitar lines. “Patterson” is a ballad devoted to a city that’s hard to love.

Closing track, “Jammyland”, adds some organ and wraps things up nicely by incorporating most of the band’s influences in a single road song. It also gives us the record’s title and is the inspiration (and it is inspired) for the haunting artwork. (Spoiler alert - the “first light” is a mushroom cloud.) First Light was meticulously produced by Bouncing Souls guitarist Pete Steinkopf. As has become typical for Pirate’s Press Records, this thing is beautifully packaged. The glossy, metallic cover is a step beyond. There are also some mind blowing color options for you vinyl fiends. Of course, none of that would matter if the music was no good. Fortunately, the music is very good. The Ratchets have made a great rock and roll record with First Light. Let’s hope they don’t wait so long to do it again.

Saves the Day: live in Boston