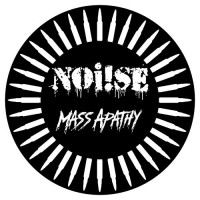 We bury kids and we say “it’s a shame”

It can all change in the blink of an eye

How many children have to die?

These are the words silkscreened in blood red on the clear plastic sleeve of the new Noi!se single Mass Apathy. Noi!se have always been a politically active band, but this time they’re really putting their money where their mouth is. All proceeds from Mass Apathy will be donated to five charities nominated and voted on by fans.

So that’s all fine and good, but how’s the song? Like almost all Noi!se songs, it kicks ass. “Mass Apathy” exists at the intersection of classic punk and hardcore. It’s driving and angry and represents much of what is best about both genres. The message is also a powerful one, and Rancid crony/Transplants singer Skinhead Rob chips in on vocals. The sound of a single gunshot punctuates the ending.

Vinyl nerds are going to love this too. The single sided 45 RPM record is milled around edges in the shape of bullets to create a stark visual. The B-side is silkscreened, and it’s as much a piece of collectable art as a single. You won’t know whether to throw it on your turntable or hang it on your wall. The biggest problem with Mass Apathy is that there’s not more of it. Noi!se continues to strike all the right chords.

Boston Manor: Welcome To The Neighbourhood