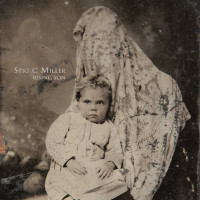 Although he’s trickled out some digital tracks here and there, Stig Miller’s release of “Rising Son,” his first physical release since the untimely demise of Amebix in 2012, feels like a rebirth. Stig has made it pretty clear that he’s had some tough years in the intertwining time, and “Rising Son” makes it clear that he has crossed difficult plains and is now rising back to full strength. As he growls in that distinctive proto-crust snarl, “I watched the stars burn out/lost friends on the road” and “now those days are done/I won’t let them get their hooks in me” he’s able to conjure that texture that seems to only be summoned by the Amebix brothers- a profound sense cosmic contemplation serves as an undercurrent while Stig proclaims a strikingly positive message: “I’m a rising son back from oblivion!” Yes, this is a dark sounding record, but like many of Stig’s best past works, there is a message of hope bolted into the veil of darkness. As with Amebix and Zygote, Stig walks the line between punk and metal, with a sort of metallic gossamer floating in there air while a bestial pulse drives the record forward. The entire four minutes functions as a rising crescendo, fittingly nicely with the track’s theme and it’s clear that Stig may very well have his best work still in front of him. This track is heavy, astral, and very exciting.

Long running Swiss doomers Excruciation take the other side. “City of Smiles” operates in a very atmospheric realm. Ghostly and sinister webs drift by while Eugenio issues creepy proclamations in a voice that is equally inspired by Peter Murphy and Tom G. Warrior. Excruciation keep things doomy, for sure, but they build their brooding imagery on top of a structure that rises and falls in a rolling, hypnotic form. But, just as it seems the track will be pure goth creepiness, they juice it up with some straight up metal charging, and give the track and epic race to the finish. Excruciation has been around thirty years now, and you might not think that threw are that many surprises left in the gloomier genres- this half of the record proves that, not only is that line of thought wrong, but that this is the kind of band that gets tighter and more confident as the years roll on.

Various Artists: One Family, One Flag