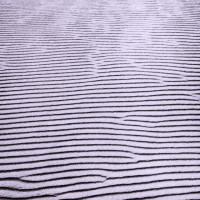 The Thermals are dead.

Hutch Harris quietly released his solo debut Only Water on Bandcamp on 11/12/2018. Harris is most renowned for his partnership with Kathy Foster as The Thermals from 2002 to 2018, a crescendo of pop punk mastery that reached its nadir in the latter years of the group. The Thermals debuted on Sub Pop in 2003 with More Parts per Million and went on to greater success and more refined craftmanship with 2004’s Fuckin A and their zenith with 2006’s The Body, the Blood, the Machine. The band began a gradual de-escalation of their vitriol with their two subsequent Kill Rock Stars releases Now We Can See and Personal Life. They ramped back up the aggression on 2013’s Desperate Ground before grinding to a halt after 2016’s aptly titled We Disappear (both issued on Saddle Creek). In the subsequent two years, Kathy has kept busy with various other projects, but Only Water is our first taste of new material from Hutch Harris since The Thermals’ demise.

Let me begin by stating I love Hutch’s voice and his melodic power chord phrasing. However, Only Water (accurately titled) is a passive, subdued exorcism of Hutch’s heartbreak and malaise following the demise of a significant relationship (which can be extrapolated to his final severance with Kathy and The Thermals itself). At his best (see The Body, the Blood, the Machine), Hutch could channel religious doubt into potent metaphor and searing pop punk that was miles beyond his peers in thematic weight (I made a 10-hour roundtrip roadtrip to catch this tour and it was well worth the effort). In contrast, Only Water is a plaintive rumination over love lost that lyrically and sonically comes off as a dismissive shoulder shrug.

Eschewing distortion and acidic commentary for reflective rumination and cleanly strummed power chords, Hutch directly confronts his new solitary status with an R.E.M.-in-Portland sonic aesthetic. At its best, Hutch’s songs own up to his own shortcomings with blunt language that leaves no room for misinterpretation. At its worst, these songs lack any semblance of passion or anguish and get lost in a mid-tempo ennui. There are lovely guitar accentuations on “I Will Try to Forget You” and “You Can Believe Me Now,” but for the most part the album is a fairly monochromatic survey of despondency.

Hopefully, Hutch has excoriated his relationship concerns with this album and can begin a more ruminative and fruitful solo career. With the current state of the world, his sardonic humor and blunt observations are sorely missed in the perpetual navel gazing of Only Water. However, the melodious sonic template he is capable of mining is on full display on this solo debut and offers a promise for future releases.

Various Artists: One Family, One Flag