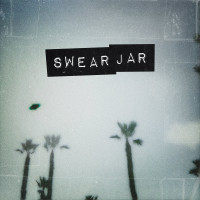 The Pacific Northwest has produced many fantastic punk rock and hardcore bands over the years, far too many to list here, but it is safe to say that Vancouver’s Swear Jar could soon be the most recent addition to the growing list. The bands brand new self-titled EP provides 7-tracks worth of catchy and aggressive punk rock that captures the nostalgic feel of melodic hardcore bands such as, Kid Dynamite and Sinking Ships, with a toned down and contemporary pop-punk or, dare I say, emo feel.

Swear Jar may be a new band, but the members are far from new additions to the Northwestern punk rock and hardcore scenes. The band features past members of The Greatest Sons, Parting Ways, Your Problem and Slingshot, and the record comes together as a melding of all of the members past projects and influences including skate punk, pop-punk and melodic hardcore. The EP is well written with fast paced punk rock bangers that range from mid-tempo to lightning fast, which provides a nice diversity to the album, leaving minimal room for skipping tracks or boredom.

One of the strongest aspects of Swear Jar comes in the form of the range of the vocal delivery. The lead vocalist is able to seamlessly move from a high-pitched scream, to a raspy croon and into melodic and impressive clean singing. The choruses are catchy, with a perfect amount of lyrical flow. “Break Hearts” is an excellent example of a memorable chorus with a nostalgic feel that would leave many mid-2000’s pop-punk fans wanting more. While opening track “No Words” could satisfy both punk rock and hardcore fans without issue.

Swear Jar’s debut 7-song EP is a great first effort for a band that provides nostalgic Northwest pop-punk and hardcore vibes, with a melodic and emotional twist. The band avoids the deliberate and pretentious retro throwback feel that many current bands are thriving off of, and instead, deliver a product that feels organic and honest. Swear Jar are definitely ending my 2018 with a highpoint of melodic hardcore. FFO: Kid Dynamite, Make Do And Mend, Sinking Ships, Daggermouth, Shook Ones.