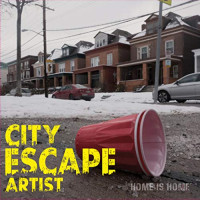 I had no idea what to expect from City Escape Artist, but the Pittsburgh trio formerly known as Evad & the Ominous Squad came highly recommended. The new, easier to remember name comes just in time for their new full length, Home is Home. It’s the band’s second album overall, and their first for No Pants Records. The cover art doesn’t really give any hints to the content either. It features a couple of stacked, red Solo cups tossed on the ground against the backdrop of a snowy, working class neighborhood.

After the opening track, “Pennsylvanian Dreamin’”, I still didn’t know what to expect from CEA. It’s a sometimes heavy surf instrumental with a pun for a title that offers a rare shot of levity. It is not at all like the rest of the record. Things really get underway with the second of the eleven songs. Like the the band’s new name, the songs have a sort of familiar, likeable quality. Musically, it’s aggressive, melodic, metallic punk in the vein of Rise Against or Propagandhi. Lyrically, it’s mostly personal not political.. The singer’s voice is deeper than is typical for punk bands of this general style.

The second song is called “Departure”, and it’s the best track on the album. While there’s plenty of catchy sing along songs, it’s the stickiest. The title track closes the album, and it’s a close second. “Home is Home” even reprises a short bit of “Departure”. In between, the strongest tracks, and they are strong tracks, are “At the Edge”, “The Beginning of the End” (with some well placed organ) and “Non-Fiction”. On a couple of songs the lyrics fall flat for me, but the music still slays. A couple of the tracks get really heavy. “Slow Burn” and especially “Pulse” devolve into screaming hardcore.

Ultimately, Home is Home is an album that asks big questions. Like whether or not to leave (“Departure”) or stay (“Home is Home”) in the place you call home. Or whether or not to leave (“To Those Unworthy”) or stay (“My Whole Life (With You)”) with a lover. It’s also a great sounding album. The guitar riffs and leads are razor sharp, and the vocals are clear and strong. The drums are relentlessly pummeling, especially for a band with so much melody. For only three guys, they make a lot of noise. Overall, Home is Home is a very solid effort from City Escape Artist.