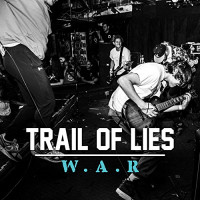 Syracuse hardcore band Trail Of Lies has been recommended to me on several occasions prior to this review. Upon first listen of the bands recent LP titled W.A.R., the comparison to past Syracuse hardcore band Forfeit immediately entered my mind. On closer inspection, the band features previous members of Forfeit, which was fitting - given the sound similarities.

Trail Of Lies play a straight up style of metallic hardcore, it is tried and true and cuts right to the chase. Musically, W.A.R. is consistent from beginning to end. The songs feature fast and chug filled verses with thick and heavy breakdowns. The band draws influences from other New York state hardcore bands such as above mentioned Forfeit, as well as Buffalo’s Buried Alive, but the band also reminds me very much of Foundation. The similarities here exist on several levels in terms of both the straight edge content of the music as well as the distinct heavy and down tuned approach to current hardcore.

The vocals are ugly and angry, but suit the music perfectly. Catchy sing along choruses keep the pace of the record from becoming monotone, as featured on album closer, “Fight for Victory”. The band keeps from straying too far into traditional metal or punk rock territory, and completely avoid the currently popular metalcore influences, opting for a solid and welcomed focus on late 90’s metallic hardcore.

Trail Of Lies play a nostalgic and mosh-laden style of hardcore. While the lyrical content remains somewhat superficial, musically the band is producing quality hardcore that feels genuine and true to form. The final 40 seconds of “Ultradominance” speaks for itself as an inspiration to emerge from mosh retirement way past my prime.