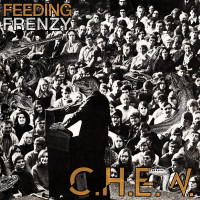 There’s a concept coming from the psychology profession called “prudent paranoia.” It’s largely used to describe a healthy level of questioning when placing trust in individuals or institutions. The thought being that an appropriate level of skepticism can be effectively used to help process our individual understanding, pushing us to seek out new information to either confirm or disprove the pending dissonance. It’s an inherent skepticism to which we apply agency given the information consumed. With Feeding Frenzy, the debut LP from Chicago-based C.H.E.W., that concept is front and center.

At their core, C.H.E.W. is a no-frills hardcore punk band. Throughout the 30-minute runtime of Feeding Frenzy, the band’s riffs are covered in vitriol, the beat is prominently in the key of d, and the vocals are screamed with guttural rage. The band sounds like an updated version of Discharge, but make no mistake, C.H.E.W. is not resting on their ability to produce classic sounding hardcore. They are teaming it up with enough diversity in scope to make the album sound relevant in today’s hardcore scene. At times, C.H.E.W. spins out with so much rage that the sheer velocity of the songs puts them in the realm of grindcore. Tracks like “It’s A Living” and “Kin” are good examples of this.

Feeding Frenzy is not just a strung together album of disconnected minute-long ragers however. Part of its enjoyment stems from how well tracked the album is. Many of its tracks meld into each other creating only transitional breaks in the album’s non-stop intensity adding to the overall atmosphere. The album is cut in half with a two-part title track separating the front and back end. “Feeding Frenzy Pt. 1” is an instrumental track soaked in angular feedback and drum driven breaks giving soundtrack to the frenetic anxiety on “Feeding Frenzy Pt. 2.” Closer “Belly Up” pummels like Slip It In-era Black Flag. On C.H.E.W.’s more straight-forward songs, they share sonic similarities to Still Nothing Moves You from Ceremony.

In the world described by C.H.E.W. on Feeding Frenzy, the paranoia isn’t just prudent, it’s fucking necessary for survival. Whether the topics discussed are the politics of the personal or society’s ills, they are delivered with ferocious intensity. After shouts of “I’m hated / I’m hated,” singer Doris Jeanie precedes an inspired breakdown on “Positive Affirmations” with “keep your head down / you’ll never be enough,” before collapsing into exhausted yells of anger. “Repeat Offenders” looks at the violence perpetuated by the police state, “just a badge / with a big, loaded gun.”

When prudent paranoia moves into more conspicuous territories, people delve into conspiracy theories to better explain the disconnects and strategize a responsive understanding. But when your jurisprudence is attacked daily by systemic failures, through gaslighting, and exacerbated with the exploitation of insecurity, it’s not hard to come to the conclusion that the world is run by evil, blood-sucking lizard people. C.H.E.W.’s Feeding Frenzy understand this and have responded in-kind.