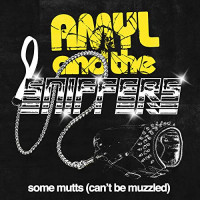 Amyl and the Sniffers

Amyl and the Sniffers pull the trick of being direct and obtuse at the same time. At face value, “Some Mutts (Can’t Be Muzzled)” finds the Aussie band bashing out a three chord banger in early-early-early LA punk style. With the tune’s Keith Richards-meets-Stooges swinging guitar and singer Amy’s snarl-shouted vocals, there’s the same dark spark of bands like Alice and the Bags and the Alley Cats. It also helps that the rollercoaster riff itself slides with the best of them and functions as a circle of barbed wire. This sets up Amy to launch the tune into greatness and she hits it.

Through a blown out mic, she hisses, “You got a new dog, do you remember me? am I just a memory? /You got a new dog, do you remember me? She walks around on my old lead... is she as good as me?” These are the kind of lyrics that serve as landmarks. Many-amany punks speak in absolutes and in most punk tunes, the singer is either painting himself as the moral saint raging against an evil, or as the evil, in an act of self parody. Amy here is more honest than that and makes the argument that human relationships are much more messier than “good guy” and “bad guy.” As she barks out a stabbing “Woof! Woof!” she seems to look back at an unhealthy relationship with a sort of self aware sickness, all while, perhaps, missing the “good” parts of the relationship- at least, that’s what I take from the fact that Amy adds the phrase “do you remember me” to some couplets as opposed to a straight up “fuck you!” That is, it seems Amy, or the song’s subject, is being honest with herself (and us the audience) and in doing so, cuts deeper than most ranty-rant punk songs. Converting earnest vulnerability into a strength is a master strike and Amy and crew knock it out of the park.

The flip-side, “Cup of Destiny” is a bit more of an ambiguous track that perhaps pulls a little bit from the famous shape changing scene in Alice in Wonderland. More of a straightforward charger, the tune bangs forward as Amy throws out homages all while looking herself at different points of time. In a sense, it’s a psychedelic punk song minus the fuzzed out guitar. At once, the track seems to be saying that avoiding perilous, but attractive, choices takes focus and hard work, but then, just as the track seems to be an ode to positive willpower, Amy slips in the line “Down at the work task/ they’ll get the best of me,” tagging an inescapable defeat into the songs ostensibly positive lyrics. The line seems to contradict the previous section and challenges you to fit the two opposing pieces together. As with the A-side, “Cup of Destiny” as guile in that it snaps out like a straightforward tune, but slithers away from any one set meaning. These are the kinds of tunes that really stick with you- though it also helps that they totally rock.