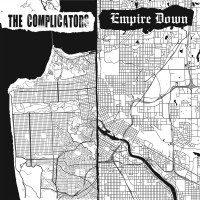 The Complicators popped up on my radar last year with their three song, self titled debut EP. The San Francisco Bay area band’s opening salvo was an aggressive and exhilarating slab of street punk and hardcore. It was older guys who were clearly excited about their newer band. The guitars, bass and drums were driving. The vocals were shouted and hostile. The lyrics were both personal and confrontational. In other words, it was the way punk’s supposed to be.

Here The Complicators continue their slow rollout with two more new songs. “Too Old” starts things off. It’s one of those kind of angry, kind of funny songs, and sadly, may of us will be able to relate to it. The lyric “I am too fucking old, and I don’t care!” pretty much sums it up. “Big Problems” deals with all the garbage we constantly consume, physically and metaphorically. Both songs really hit the spot. The Complicators are definitely a band you’re going to want to keep an eye on.

Empire Down is on the flip side of this double A side seven inch. They’re a newer Midwestern band with members from Milwaukee and Minneapolis. They provide two memorable songs that are geared toward the punk faithful. “True Believers” and “Always down, Never Out” are modern, working class anthems of survival and perseverance. The lead vocals are mostly barked, and there are plenty of gang vocals too. The music is classic punk, hardcore and oi. I also look forward to hearing more from Empire Down.

This record would be especially appealing to fans of bands like Noi!se, Aus Rotten, Bad Assets, Anti-Heroes and Krum Bums. It’s unflinchingly punk. The packaging is also very nice. It features maps of San Francisco and Minneapolis overlayed on the record sleeve. It seems appropriate. Two bands from very different parts of the country united under the common cause of old school punk.