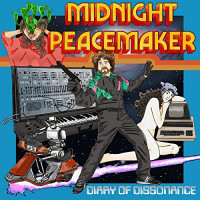 On his debut album, Midnight Peacemaker takes ‘80s trash culture and elevates it and degrades it in equal measure. The album opens with a skit wherein Peacemaker argues with a robot or entity and the entity encourages Peacemaker to strive for the most ’80-ish of all virtues: “believing in one’s self.” The whole track, Diary of Dissonance, is bathed in a coat of ‘80s Jim Henson foam and plastic. In the wrong hands, that could come off as cheesy or too cute, but because Peacemaker is so secure in his position, it comes off as a playful homage and perhaps even re-assessment.

“Bleed Hunter,” despite its gruesome title, is basically an earnest love long that has the soaring sonic sounds of the best of Giorgio Moroder. It’s at once an 80s synth jam, Italian Disco track, and ballad, and Peacemaker not only finds a way to make it work, but finds away to make it seem slightly askew, so that even though it’s built from previously used parts, they’re assembled in a way that we see new angles. Second track, “Manticore” might even be a more secure exhibition of this. The track starts off with a tinny-synth straight out of a cheap Saturday morning cartoon before Peacemaker builds it into huge rushing chorus on par with any 80s chart topper you can name, all while referencing the Monster Manual.

Despite his earnestness, Peacemaker does take a few moments for a more cynical scowl. The real slammer on the album is probably “Furniture Shopping.” Peacemaker flips between dry 80s danceclub beats and fly girl sound effects and then decides to channel Peter Murphy at his most Peter Murphyian while accepting a sort of nihilistic submission – “Let me take you furniture shopping/ I’ll follow you like a bitch.” There’s a lot to unpack there, and I’m not sure that Peacemaker gives us all the necessary tools to decode the story- to his credit, that is.

Were Diary of Dissonance strictly a love letter, or sendup, of 80s superficial culture, it would get real old, real quick. But, for one, Peacemaker appears to know his source material like the back of his hand, and is able to pull the best from the 80s growing computer driven music genres, and leaves the scrap behind. With that, instead of imply imitating, say Soft Cell or Depeche Mode, he bends the façade to his own use. Diary of Dissonance is lovably 80s at its surface, but the core is uniquely the artist himself.

Daughters: You Won't Get What You Want