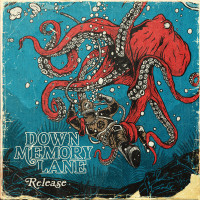 (This album has been advertised as a ‘ conceptual release’ with, per the track listing, the back half of the album released now, and the front half to be released at a future date. As such, I am treating this as a 6-song EP at this time, and labeling it as “part 2.”)

For their third release, Montreal’s Down Memory Lane return to the English language, following their 2017 French language EP “Vice cache.” "Release" tackles subjects both serious and funny, wrapping them up in a nice, tight package that any fan of the 90s melodic punk style would probably enjoy.

While I won’t address every song on the album, I will pick out a few, starting with the lead track. ‘The song about this song’ is a tribute to, and parody of, the best of the mid-to-late 90s melodic punk. From the acapella intro (which literally asks “Is there anything cooler than an acapella intro?”), to the admission that the lyrics have to be simple and memorable so that the audience can join in, it pokes a bit of fun while seriously putting together a great musical number that is tight, fast, and exciting.

Although the ‘superiority complex’ of French-Canadians is a well-known trope (whether accurate or not), the other side of the coin is rarely displayed. ‘Xenophobe’ tackles that subject of the difficulties and pushback that Québécois regularly face from their fellow Canadians. The song boils the subject matter down to the French accent when speaking English, but stands for so much more that seems to needlessly separate the two halves of the country. It plays fast and hard, expressing frustration at a situation that the narrator can't seem to find a way to improve.

This wouldn’t be a DML album without that one stand-out track that would’ve been their big radio song would the band have been active in the 90s, and ‘By leaps and bounds’ is it by a mile (or 1.61km). This track is catchy and well composed with a bunch of transitions and a catchy tune. Of all the songs, this one aptly demonstrates the band's improving ability to craft songs with panache that make you nod your head in approval when a great transition catches you off guard, or how the lyrics laid over the music builds in a crescendo that brings a smile to your face.

One thing Down Memory Lane has always done well is the placement and use of backing vocals- this is something that they were great with at from the start, and have only continued to improve. Additionally, bassist Mike, who has his own unique voice, keeps getting better at backing vocals and harmonizing along with vocalist Doowy. The continued, and increased use of his voice on this album keeps pushing the boundary and adds more tools to their skill set. I would be curious if he ever gets to lead on his own song?

With ‘Xenophobe’ in mind, I feel the need to mention the special quality that English as a Second Language (ESL) bands bring to their songs. Typically even the best ESL speakers/singers still have a slightly different delivery and cadence then one would expect from a native speaker. I particularly like (OK, adore) this quality as it adds a bit to the music. DML is no exception to this and I think that their delivery of English lyrics is one of their qualities I appreciate greatly. There may be a few deliveries that make you tilt your head a bit ("gullible" being the biggest one by far), but they are easily overlooked as small bits of static in a much bigger picture.

The production on this album is top notch and, if I had to file a complaint, I found the bass a bit too ‘twangy’ sounding. This isn’t a slight on Mike’s playing, but how it is presented on the album. It seems to be missing some of the ‘felt but not heard’ quality of bass that I dig and, at points, could’ve provided a bit of a fuller body to the songs had it been produced with a little bit more presence.

Currently, I’m really liking this album as an EP. That judgment may change once the front half of the songs are released but, for now, it gets high marks for the sheer skill, sound, and composition of the songs; as well as the sheer enjoyment to be had listening to it.

Daughters: You Won't Get What You Want