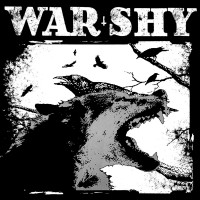 It was about three years ago that I bumped into Crazy Arm frontman Darren Johns whilst walking through Plymouth and we had a lengthy chat about what he, and the band, were up to. During that chat he mentioned his desire to do something more akin to a solo project, which would delve deeper into his love of roots/Americana music, which had already seeped into Crazy Arm’s work.

Warshy is that project and having played a number of dates in the UK, some supporting Larry and His Flask in the US as well as currently touring the UK and mainland Europe with Austin Lucas, this EP represents his first actual recording of his work under that guise. It is definitely a more focused and stripped down output, and shows how Johns immerses himself fully in his work. The other thing that is clear is his love of bands like 16 Horsepower and Woven Hand, to name but two, (David Eugene Edwards being the constant in those two outfits) and this definitely shine through.

The opening track “Operation Chaos” is Johns on acoustic guitar accompanied by an upright bass and violin, and identifies his long lasting punk ideals, much in line today with those he held decades ago. Despite the relaxed nature of this song, it does nothing to hide the anger and need to fight injustice that lies within Johns, evident in his lyric “No war but Class War was our rebel yell, no war but Class War I’m saying it still”.

On “Requiem for a Strawfooter” we get to hear Johns’ banjo skills, which quickly take the song into a fast paced race as his fingers flash across the instrument and a drum shuffles in the background. This song really creates a sense of being stuck up high on a mountain in the middle of nowhere, living a simple life. Well that’s my interpretation.

“North of Misery” is the closest thing to a Crazy Arm song on this EP as Johns dons his Gretsch guitar which chops away and includes some of his excellent fills and solos. This is the most raucous track and allows Johns distinctive voice to spread its wings more than elsewhere on this release.

Bringing proceedings to a close is “The Gentle Burn”, and this is my favourite of the four songs by far. Johns has a wonderful ability to duet with a female vocalist and I always loved his work with Vicky Butterfield both live on and on record with Crazy Arm. This times it’s Becky Saxton who provides the delicious harmonies, and boy does it come across well. This is a simple song with two voices, a banjo and upright bass, which has a warming feel to it. It’s the kind of song I want to envelope me so I can lose myself totally, completely absorbed for three minutes and forty-five seconds.

It’s taken some time from that wet and windy day when I first heard of this proposed project, but it’s worth the wait, as Darren Johns has been able to get to the stage where he is happy enough with what he is doing to record and release his work.

I know I might be somewhat biased but this is a damn fine release. I respect Darren as a friend and an artist, but would like to think I can listen to his music objectively. That being said, I can’t imagine him doing something half-hearted resulting in a sub-standard output. That’s certainly not the case here.

The Garden: live in Baltimore