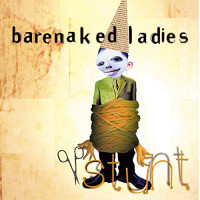 I have this ongoing fantasy of starting a punk band that does nothing but punk covers of Barenaked Ladies songs. It’s a fantasy that remains unfulfilled because of my lack of musical talent and my inability to ask people to do things with me. But in this fantasy, there’s a song that’s the most hardcore punk song we do, with a raging fast build-up at the beginning, pummeling guitar and drums, all leading up to a brief pause followed by “Iiiits been…” and leading into a hardcore cover of “One Week.” You see, the song has to be treated as a joke because, as much as you hate that song, the band probably hates it more than you do. The nonsensical style comes from the fact that the band loved to freestyle rap on stage, but had never recorded one of their raps on a song before and they just decided to run with it. They pretty much refuse to perform it the way it appears on the album anymore, and in most live performances they perform it as a bluegrass song with one acoustic guitar and the rest of the band singing it a cappella style. I have literally seen stadiums clear out when people see this performance style of the song, but honestly, who wants to relive the most overplayed song of the summer of 1998 exactly the way you heard it over and over on the radio? The notoriousness of “One Week” tends to overshadow the rest of Stunt, which is an excellent album.

I wasn’t originally planning to do a review of this for 90’s week since it’s not punk, but Renaldo brought up doing it amongst dozens of other 1998, middle school dance alternative rock hits and offered to let me steal it from him and I just decided that I had to. I’ve written before about my secret love for the Barenaked Ladies and how, in a weird way, they were part of how I got into punk because of their chord-based style and the fact that they had such a devoted fanbase that made me want to listen to more music that had fans that dedicated to the music. And BNL is not without punk influence, especially on songs like “It’s All Been Done” and “Alcohol,” which are heavily chord based alternative-pop songs. The band can also be darker than anyone gives them credit for, with lyrics like the ones in “I’ll Be That Girl”: “I'll be that girl, and you would be right over/If I were a field, you would be in clover/If I were the sun, you would be in shadow/If I had a gun, there'd be no tomorrow.” Barenaked Ladies are a much deeper and more complex band than anyone gives them credit for due to the infamy that they’ve gained from “One Week.”

“Leave” is one of Ed Robertson’s many songs about the death of his brother, Doug, who died crashing his motorcycle. The dark country song is about how his brother’s ghost haunts him in hotel rooms while on tour. “Alcohol,” a fun and dancey pop song, is actually one of the most clever and secretly dark songs the band has ever done, with lines like “Oh alcohol, would you please forgive me?/For while I cannot love myself, I’ll use something else.” “In the Car” is a surprisingly dirty song for a band that would later put out a children’s album, that goes deep into details about the sex in a deeply dysfunctional relationship. The album closes on “When You Dream,” a very soft acoustic song about co-frontman Steven Page wondering what his then-infant son dreams about when he dreams.

When I went to look this album up on Apple Music to do this review, I was pleased to find that they had a 20th anniversary edition, which adds back on the two bonus tracks that had been included on very early copies of the album: “She’s On Time” and “Long Way Back Home.” “Long Way Back Home” is pretty, but mostly an unremarkable country style tune. But “She’s On Time” is a hilarious song about a pregnancy scare, with the title referring to the pregnancy scare ending when the girl in question gets her period. When the album first came out, a lot of people commented on how jarring it was to have a song about Steven Page’s infant son followed immediately by a song about Steven Page wanting to avoid getting his girlfriend pregnant, but the Barenaked Ladies members have almost all been in committed relationships for the majority of their careers and have often had to pull from experiences of their younger days for song materials. The 20th anniversary edition also adds in “Get in Line,” a humorous song about paranoia that the band contributed to the soundtrack to the show King of the Hill.

The label probably wanted the Barenaked Ladies to quickly follow up on the success of “One Week” with another album, but right around the time Stunt came out the band found out that their new keyboardist (and long time friend) Kevin Hearn had just been diagnosed with leukemia and they insisted on waiting until he was in remission to record a follow up to Stunt. So while the band was finally riding high on the charts with Stunt, they were going through some heavy personal issues. The following album, Maroon, would take a much more serious tone because of this, and probably wasn’t the follow up the label was looking for. But for Stunt, the band managed to be funny, deathly serious, bouncy and light, and dark as hell all in one album that still manages to work together, all while spitting out some of the most clever lyrics in pop music. There’s no question in my mind that this album should be seen as a 90’s classic.