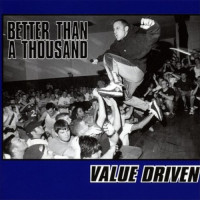 Better Than A Thousand

Love him or hate him (or even if you are largely indifferent towards him) Ray Cappo has played a fairly important role in helping hardcore and straight edge through the tumultuous late 1980s. After Youth of Today broke up to give way to the more divisive Shelter, it seemed that good old fashioned youth crew was just too passé. Cappo took notice and in his off time from yoga retreats and practicing spiritual spinkicks, he formed Better Than A Thousand with members of Battery to satisfy that uncomplicated, melodic hardcore itch.

Although Better Than A Thousand does not feature Cappo’s long-term musical partner John Porcelli, the new guns did a great job in not only keeping that flame burning, but also growing more intense. Stylistically Better Than A Thousand’s sound is a lot more modern and fine-tuned compared to Youth Of Today’s primitive and traditional approach, but does not stray too far from the essential foundation of crunchy guitars, atmospheric breakdowns and righteous singalongs.

On a side note, while it can be argued that Better Than A Thousand is a more straightforward “sequel” to Youth Of Today, Cappo’s spiritual beliefs do creep up on a fair few songs. If you did not have a problem with “No More” on “We're Not In This Alone” though, then you have nothing to worry about here, as there are no direct references to religious teachings or texts like with Shelter, aside from the abundance of allusions.

Album-opener “Demand Independence” perfectly sets the tone for the 20-odd minutes of hardcore that follows: an easy-to-remember battle cry for the pit and intense finger-point action; electrifying, melody-driven riffs and old school chest-pounding beats. Seasoned Cappo fans will appreciate the shorter, more direct songs like “Self Worth” and “Poison In Your Brain”, not only for their intensely didactic (and highly danceable) approach, but also the world-famous Cappo Yell.

The album highlight “I’ll Not Resist” begins with an extract from Gandhi’s speech on nonviolence playing on top of a haunting beat, bringing to mind the introduction to “Break Down The Walls”. Ray Cappo then takes center stage and amid the ear-pleasing 90s rock guitar flourishes passionately calls upon the listeners to stand firm by their values and rise above. These are all the necessary musical cues that will convince someone that climbing on top of sweaty, writhing mess of a crowd for an opportunity to yell into a microphone is a good idea.

Perfectly illustrating the “healthy mind in a healthy body” motto, the themes of awareness and progress dominate many of the album’s songs, with “Crisis Of Man” and “Transformation” being the most notable examples. Both underline the need for change and growth on a personal level, which can be traced back to Cappos’ spiritual leanings and are simultaneously in line with the more non-theistic and philosophical essence of straight edge. If anything, the album provides plenty opportunities to flex your academic muscles on concepts of identity and belonging.

Better Than A Thousand’s sophomore album concludes just like the debut, with a rocking and experimental instrumental that alludes to a third album that has yet to come. Unfortunately this band turned out to be a rather short-lived affair, as Cappo focused on Shelter and the semi-regular Youth Of Today reunions. “Value Driven” may not really be pushing any boundaries, but that was never really the intent in the first place. Instead it acts as a vehicle for that sense of (rejuvenated) youthful urgency that uncomplicated, fast, angry music (with a hint of melodic theatrics) excels at delivering.

Tori Amos: From the Choirgirl Hotel