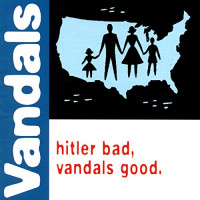 The Vandals were one of my favorite bands growing up. And I guess they’re still one of my favorite bands despite the fact that they’ve been relatively quiet for the past few years and haven’t released an album since 2004. My first experience with the band was listening to Live Fast, Diarrhea when it first came out. After that, I was eager to buy every subsequent cd that the band produced.

Since forming in the early ‘80s, the Vandals have gone through some lineup changes before mostly solidifying the lineup with Dave Quackenbush, Joe Escalante (the lone original member), Warren Fitzgerald, and Josh Freese. The name remained the same, but you could probably argue that once they settled on the lineup of the 4 current members, they were a completely different band. I appreciate and respect the history of the group, but my love for the Vandals begins in ‘95 and is sealed by the time Hitler Bad, Vandals Good came out in ‘98.

By most accounts, the Vandals are difficult to take seriously and that’s a pretty fair assessment. Most of their songs are meant to be jokes. Every song on the Hitler Bad album had some sort of humor in it, except for the Pennywise song “Come Out Fighting” which was done as a tribute to Jason Matthew Thirsk who had recently committed suicide. Even Warren’s drawings on the inside cover were pretty darn funny. Despite all of this, the band’s prowess and talent had been reinforced with the release of Hitler Bad, Vandals Good.

While the band’s trademark humor was as evident as it was on previous albums, this cd can be seen as a turning point. The sound was definitely more polished, which may have upset some fans. And while I had already known that all of the members were skilled musicians and songwriters, this album proved it. All 4 guys in the band contributed to writing the original songs, which highlighted the musicianship and skill of each member. Partially because of this album, Josh Freese has remained one of my favorite punk drummers even though he’s a drummer whore. Warren Fitzgerald is out of his goddamn mind, but his guitar prowess and songwriting skill was striking on this album. Joe Escalante nailed some precise bass lines and arrangements, which is tough to do playing with such speed and so many tempo changes. And to this day, Dave Quackenbush's vocal range and tone remains unique and captivating, which was clear on all of these songs.

While there were definitely some outstanding highlights (“My Girlfriend’s Dead”, I’ve Got An Ape Drape”, “An Idea For A Movie”, among others), the arrangements and varied instrumentation made each song amazing in it’s own right. When you really dig deep into the album, you realize how underrated this band is, though they received some decent recognition with this record. To this day, Hitler Bad, Vandals Good has remained one of my favorite punk rock albums.

Avail: Over the James