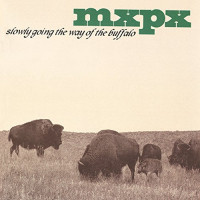 I don't recall the first time heard MxPx, but I know exactly how I felt when I heard Punk Rawk Show. It was the perfect anthem for a teenage me at that time, knowing that I wasn't the only one going to see shows at VFW Halls and Skateboard parks. I of course went out and bought Life in General and Teenage Politics. Fast forward a couple of years. I got a little older, some bands would change (For Monkeys-Millencolin), some bands got faster (Suicide Machines-Battle Hymns), and some would sign to major labels. Oh the horror!

Which brings me to the point of this review. MxPx released their major label debut "Slowly Going the Way of the Buffalo". How would it sound? Did MxPx sell out? Opening track Under Lock & Key assures us that MxPx was still them, just with a brighter and cleaner sound. Working again with Steve Kravac (who also did Life In General), the band would record 16 songs that many consider to be their magnum opus. The band certainly didn't lose any chops, as Tomorrow's Another Day and Cold and All Alone are as speedy as anything they had ever done, however, Party My House, and Im OK, You're OK show the band we're not afraid to slow down and let their pop influences creep in. These influences of course would shine the brightest on their next album, but that is another time for a different place.


While side one of the album contains all the ingredients for classic MxPx, side 2 would certainly throw some curve balls to any longtime fan. Fist Vs. Tact is one of the angriest songs the trio had written, and then followed that up with a song directed at their former label, Tooth and Nail (with whom they would re connect with in 2007), called "What's Mine is Yours". The album ends on a fast note with "Inches from Life" and the instrumental "The Theme Fiasco".


It can be debated which album is better (Life in General/Buffalo), and that can go on forever. Both albums are great in their own right, and that is on the ear of the listener. What Slowly Going the Way of the Buffalo proved was that a well-adored punk band from the scene could put out a major label album at that time, and still rock as hard as anything independent. MxPx have since put out many albums after this, however, catch MxPx live and a hefty portion of the set list will come from this album, and rightfully so. 1998 proved a fantastic year for releases, and this ranks up there at the top of those lists.