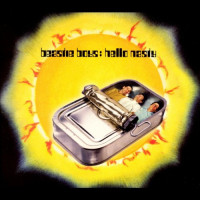 Having cemented themselves as paradoxically underground and mainstream with the one-two punch of Check Your Head and Ill Communication, the Beastie Boys seemed to be on an unending winning streak where they would only continue to rise higher and higher into stardom… and this is usually the point where most bands crumble and collapse… except, the B-Boys didn’t.

At the time, the span between 1994’s Ill Communication and 1998’s Hello Nasty seemed like an era. Classic era of Hip Hop had fallen decisively to the G-Funk era and after that, the posh stylings of Puff Daddy and Bad Boy records. In retrospect, it was only a measly four years, but Hip Hop grew like a weed in that short span and the Beastie Boys could have quite literally been yesterday’s news. But instead of resting on their laurels during the break, they indulged in a multitude of side projects including punk bands, electronic acts, remixes, and a bunch of stuff that is barely known through to this day.

So, when they did come roaring back out of the gate, they made decisive move to ignore the contemporary and push their own style to its next phase, thereby creating trends and styles, instead of chasing the same. A MASSIVE double platter in an age when EVERY CD was nearly packed to the gills, Hello Nasty was strategically broken down into roughly two halves- the Hip Hop half and the experiment half.

As soon as opening track “Super Disco Breakin’” kicked off with the now iconic line, “Well it’s 50 cups of coffee and you know it’s on!” you knew that the Beasties were refreshed, rejuvenated, and exploding with ideas. Coming off two successful records in a row, the band was clearly feeling their oats, so the entire record had a charged up, propulsive, but sunny sound. Throughout the record, the Beasties saluted themselves all while acknowledging that they were having A LOT of fun.

The record zipped from experiment to experiment, with the Hip Hop tracks still based in first wave rap ethos. “The Move” gave nods back to the earliest moves of DJ Kool Herc while “Super Disco Breakin’” was built off the interweaving style of the Fat Boys and Run-DMC, which in 1998 was horribly passé for everyone except the B-Boys who made it seem just so damn cool.

And that’s not to mention the monster hits- “Intergalactic” was a massive smash that was on the radio constantly for the entire year. Built off an earlier sketch, the Beasites made reference to B sci-fi films all while talking about how great they were. While some other emcees’ braggadocio seemed to be used to intimate and impress, perhaps because the B-Boys were also kind of goofy and kind of python-esque, their boasts were both endearing, and also, their brags for some reason felt like your brags due to the simple fact that you were a fan. “Body Movin,” with its bouncing beat and hilarious video was a club staple in both its original and Fatboy Slim remixed form. And again, on “3 Emcees and 1 DJ” the band basically pounded their chests, in salute to the earliest chest beating of 70s Hip Hop, but it was a sort of welcoming boast rather than a warning.

Certainly, they were aided by their new world class DJ Mix Master Mike. A veteran DJ battler, MMM keep the tracks sprinting along, all while slashing in his trademark complex and frantic scratches, which when slid under the already kinetic power of the B-Boys themselves, took the blast to 11.

But, while the release did have a hefty focus on classic Hip Hop in style and context, it was by far the group’s most experimental release. Most of the “Weirder” tracks were located to the second half, with “Song for the Man” being the major exception. Walking the line between Beatles psychedelea and an almost cold no wave, the track, and its brothers, were used for the group’s more serious statements. Railing against the powers at be, the band contemplated greed and control, condemning it but also asking “why”? “Sneaking out of the Hospital” was funky jazz cut that would foreshadow the instrumental Mix Up album. Certainly a high point is Dr. Lee PHD where the “Beastie Brothers” require the aid of the Godfather of experimental music and possible creator of the “Remix,” Legendary Jamaican producer Lee “Scratch” Perry. The match is one made in heaven with B-Boys bouncing their more earthy snaps off the Upsetter’s galactic musings.

And of course, there’s the album’s titanic closer. In contrast to the album’s rumbling boom bap, “Instant Death” is a tender quiet number that reflects on death itself and how the end can be quiet dark and miserable. When Adam Horovitz asks “Where is my mom?” referring to his mother's death from alcoholism in 1986, it’s downright chilling. It’s a splash of cold water at the tail end of an album that is having a blast romping and rollicking through propulsive beats and fun experiments, and not only that, it’s a rare showing of true vulnerability which at the time, was nearly absent in the genre.

That is, to their great credit, the Beastie Boys were never afraid to be themselves. Had they tried to latch onto the styles or guises of others, they would have been washed away with the one hit wonders who came up with them in the mid-80s. The Beasties always knew that their strongest asset was that they were themselves, and Hello Nasty was the Beastie Boys at their Beastiest.