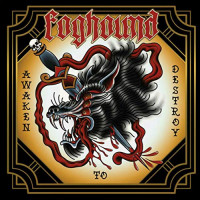 If I’d been asked to guess where Foghound hail from, I don’t think I would have said Baltimore. Don’t get me wrong, I don’t know much about Baltimore outside of what The Wire taught me, but the Southern, swampy stoner vibes coming off this record are so thick that I confess that I assumed we’d be in somewhat less urban territory, but there you go.

So that’s what Foghound are serving up. Heavy, chunky, mainly mid-tempo stoner rock, based primarily on towering classic rock-derived riffs. All sounds good, right? Well, it is. I really like this sort of stuff and have always been a bit of a mark for it, so I was truly delighted when I first pressed play on this. But my excitement didn’t really stick around, sadly. It’s not that it wasn’t what I thought it would be - it’s maybe more along the lines of that’s all it is. That might sound harsh and maybe it is, because there’s nothing wrong with this - at all - it just sounds like a super tight group of buds playing some heavy rock that they’ve put together between joints. Again, there’s nothing wrong with that and I’d be hyped if I wrote some of the riffs on this record, no doubt. But the fact that I’m framing the songs as to my own ability to write similar riffs says a lot - because my riff-writing ability is a long way short of being worth committing to record.

The song structure feels a little by-numbers at points too, I’d say. The lead guitar lines, though satisfying, are by no means inspired and the vocals occasionally veer from being gritty and sleazy to just being poor. You don’t need a classically-trained singer to go with these songs, but listen to the vocal on “Keep On Shoveling” for example - I’m sure it’s semi-deliberate to add to the scuzzy, stoner aesthetic, but sometimes it just feels like a lack of class or quality control.

The production is another area where it initially shines - bringing smooth, thick texture to the bass and guitar, which drive the songs more than the drums or vocals, but by halfway through the album, I’m desperate for a bit of variation in sound. The closest we get to that is “AVE!” which is basically a simplistic guitar/organ interlude that may have been chucked in expressly to give some much-needed respite but feels pretty amateurish - and then “Staring Down The Demons” and “The Buzzard” which although I’m not entirely keen on, I have to give the band credit for. They are at least a departure from what they’re clearly more comfortable doing, in that there are different guitar styles and effects employed, the structure of both songs sits more in the psychedelia camp than standard stoner, but beyond the solo in the former (which is one of the only on the record that truly feels like it serves the song as opposed to being an inevitability), I’m not taking away much extra from the songs.

I feel like I’ve come across as being down on this record and I’m not. I actually enjoy it. Most of it. There just aren’t quite enough ideas in here to keep me interested all the way through the whole thing. We all know that if you’re AC/DC or Motorhead you can get away with effectively only having one song. It’s just that AC/DC or Motorhead’s song is way better than Foghound’s. I welcomed the record as it roared out of the gate, but it ran out of steam well before the last track.