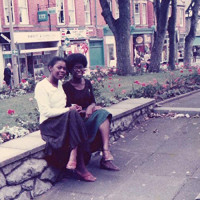 “I’d like to be friends with you / But I only feel hatred / Remember when we use to be friends,” sings Big Joanie vocalist and guitarist Stephanie Phillips in one of the earlier and most effectively haunting moments on Sistahs. Delivered in a monotonous tone over a Wurlitzer organ line designed for the dead to dance too, the song channels the heart of London’s early DIY new wave and mod scene. There is clear influence from the type of Nick Lowe-produced affair from the late 70s and early 80s to Sistahs. But this is not just a modern homage. Big Joanie bring a new uncompromising and modern edge to the sound. They offer no apologies, but much insight in the album’s exploration of social gentrification, the black feminist experience, lazy lovers, and existential dread.

Founded in 2013, Big Joanie have been building community throughout the London scene while exploring and refining their sound over the last 5 years. A popular cover of “No Scrubs” by TLC on their 2016 EP Crooked Room began to foreshadow the type of subtle post-punk that populates their debut LP Sistahs. This new album finds the band - rounded out by Estella Adeyeri on bass and Chardine Taylor-Stone on drums - fully settling on their sound bringing elements of trance, goth, and lo-fi to their post-punk core. “New Year” opens up the album drawing the listener in through Phillips’ evocative opening lines and cleanly strummed power chords. She plainly lays out, “It’s a new year / And I’m still here / It’s a new day / I’ll be ok.” It’s quite the opening statement.

The lyrics throughout Sistahs are refreshingly direct, yet seemingly delivered with emotional detachment. Part of this seems necessary to effectively communicate the seriousness of these situations, particularly views that are not often given agency. There are no metaphors hiding emotions here. On the pulsating backend stomper “It’s You,” Phillips rejects the unsatisfactory ending of her day wide awake next to a partner in bed. It sleuths perfectly into the next track “How Could You Love Me” where Phillips dismisses the indecisive lover sans remorse over rolling 50s power-pop melodies. “Token” finds the band holding a mirror up to their scene and the intentional construction of differences designed to alienate - be it race, class, gender, or social validation. “Down, Down” uses two simple words over a demented surf pop riff to convey a feeling.

Sistahs moves on drums more concerned with rhythm than beat, angular guitars, and electronic flourishes. These sounds soundtrack the big moods throughout the album while also keeping each of the album’s 11 tracks diverse. The staccato guitar lines and subtle bass drops of “Tell A Lie” fuse these elements nicely. On the more electronic end, the light new wave trance over “Fall Asleep” gives additional dimension to the song’s power-pop base. The slow core fuzz of “Way Out” show the band’s comfortability up and down the indie spectrum while still being true to themselves. Album closer “Cut Your Hair” finds Big Joanie utilizing the quieter moments with background organ and subtle instrumentation. It ends with one of the most vulnerable moments on the record with Phillips singing, “Watching you silently / Loving you faithfully / Darling please / Stay close here / Darling please / Make it clear / That you won't go changing / That you'll love me till the end.”

Sistahs is an album that pushes punk rock forward. It sounds like both a reimagination of the DIY London scenes of the genre’s start and a confident revision on the sound Big Joanie has been growing since their inception. It’s easily one of the more original releases of late in the genre and makes for an affecting listen.