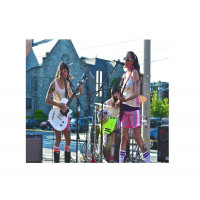 Pushin' It 2 the Limit

Pushin’ It 2 the Limit have matured… well, they haven’t, but they kind of have. That is, in their second album, the band still starts every song with a hilarious battle cry. My favorite: “Pushin’ It 2 the Limit Whispers Something eeeevill!” They still wear themed gear to the shows, be it wedding dresses, football jerseys, or Tutus. And most importantly, they still root their sound is bombastic pop-punk-thrash which, while at the outset might not seem that far left field, is actually a unique combination.

The music on Pushin' it 2 the Limit Knocks Your Fuckin' Socks off Turkey finds the band winding thrash riffage (mostly party Exodus style, not scowling Slayer style) around a somewhat sugary pop-punk melody. The songs rip along with a sunny disposition not usually seen in the shredded guitar stuff. And quite nicely, this release is more bombastic and punchy than their debut, with tracks like “The Recycler” and “Sea Monster Brah” (huh huh huh) reveling in a sort of wild looseness. The band feels like they might blast apart at the seams any minute, giving the album a certain suspense as well as a ballpeen hammer strike when they do line their ducks in a row.

Still, moreso than before, the group is sliding vulnerable concepts underneath their day-glo sheen. “Seamonster” is a track devoted to detailing misanthropy until its twist ending, which turns the ostensibly negative track to something of a misfit love story. Despite its title, “The Sweet Widdly Woo” is the group’s angriest number to day (lyrically anyway) and it couches a modern Crass ethos inside rampaging, sing-songy clacker. Likewise, “The Recycler” (which amusingly had an earlier life as a Retreevers track) is about finally cutting off that friend who isn’t so much a friend as a mooch.

Obviously, the Pittl angle of hiding the serious in the silly is by design, and they could have easily veered into making the whole unit too cute of a trick- expect they don’t. It’s probably because the band likely didn’t set out to slide hidden messages in bright wrapping. Rather, they’re just sort of ppositive people who, while having a generally sunny view, are firmly aware of the negative charges in this world. And it’s those sunny bits existing in the darkness that make this record so relevant and the core messages hit that much harder.