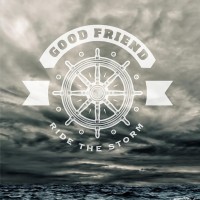 I’m a little late to the party on this one, but Good Friend’s Red Scare debut Ride the Storm, is a unique yet fitting addition to the ever expanding label. The boys from Ireland put together 10 well-written songs that range, topically and sonically, to produce a solid punk rock album.


There’s a pretty wide array of sounds on the record, but overall it can probably be defined as modern punk with a tinge of hard rock. The diversity of song structure also adds to the listening appeal to avoid any monotony. Furthermore, it is clear that all three band members are solid musicians and that comes out in the songwriting as well. A band is only as good as their drummer, and Leon Connolly’s drumming is stellar on Ride the Storm, with complicated beats and intricate percussion at just the right moments. On top of that, the tone of the bass and the variety and power of Andrew Reid’s guitar adds to the aggression to produce 10 beautifully powerful songs.

In addition to the great musicianship and songwriting, bassist Adam Carroll’s vocals are also a really strong point for the band. They are loud, aggressive, and gritty. Yet at times, he has the ability to tone it down without losing any of the passion (see “Barflies”). It is the vocals on the first track, “Rock Bottom Revival” that had me hooked on the band immediately. I particularly love when the raucous singing powerfully contradicts the muted part of the verse and the breakdown at the end.

And while the band is best when playing straight forward punk rock in songs like “Young Blood” and “Daniel O’ D and the Moonshiners”, they do a good job of mixing up the sounds, which eventually emphasizes the punk parts. For example, songs like “The Curious Case of Hy-Brasil” and “The Return of Fionn and the Fianna” start off with a tame and somewhat clean guitar before leading into a rowdy punk rock chorus with a rousing singalong.

The band dances around nautical imagery throughout the record, including the artwork, but the song topics vary greatly. There are tunes about Irish folklore, drinking songs, love songs, and songs about a love of music, among other things. And while I understand and admire the premise of “Rock Bottom Revival”, I’d have to respectfully disagree with the lyrics, “I found faith on the radio.” On the contrary, I find faith in songs like these. Songs that aren’t on the radio. Songs that are passionate. Songs that tell stories. Songs that have meaning and substance. And albums like Ride the Storm restore my faith in music.