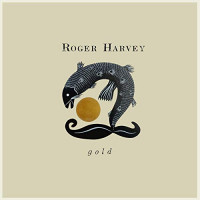 If you’ve been to a recent Roger Harvey show, you’ve probably heard him only half-jokingly apologize for his songs being so somber. His previous full length Two Coyotes was a weighty album of indie-folk arrangements touching on culture’s failures, societal oppression, and a needing to draw the line on your own terms. When the songs finish live, they hang over the audience with a few seconds of silence before applause. Even so, there is a current of positivity that pokes through in Harvey’s lyrics. It’s the sense of saying “fuck it” to whatever it is. With Gold, Harvey explores that feeling adding a handful of country influenced songs to his traveling roadshow’s repertoire.

Gold’s opener “Stopped Cutting My Hair” is the most obvious exploration of this. It’s a jukebox ode to freedom. Not the bullshit freedom that’s sold to you, but the kind you find yourself. It immediately transports the listener to an afternoon bar in Nashville slowly slipping whiskey away. Moving further west, “In Place” and “Nothing Is” explore the rolling hills of desert drenched folk. Twangy guitar slides and plucks add nighttime starlit sky vibes to the indie-folk underpinnings. Harvey continues to complement this imagery revisiting the two coyotes theme he’s explored throughout his releases. Gold closes with a title track pulled from Two Coyotes that works exceptionally well as a closer here. It’s largely similar with rawer piano than the original.

With all Harvey's releases, the poetic lyrics are as much a focus as the composition. Gold is no disappointment. “Nothing Is” laments the distance between the good times and the bad. Distance often filled with the slow burn of accepting the things we are forced to do to get by. It’s similar in scope to the freedom found in the aforementioned “Stopped Cutting My Hair.” “Nothing Is” looks at the futility of change. Harvey sings, “You know I’ve tried to hold on tight for days / While all the things I used to like ache / Even the moon / She holds the tide in place / As all the things we quantify change.”

Harvey has taken to affectionately referring to his output as ‘Sad Cowboy Shit.’ Gold definitely captures this and successfully brings in country influences to his sound. However, it stands out as his most upbeat and positive material because cowboys know tomorrow always comes with the hope we learned something from yesterday.

The Cryptkeeper Five: The Stronghold