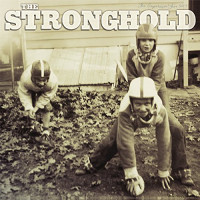 I’m just going to say this right away. This is one of the best records I’ve listened to in a long time. I’ve seen The Cryptkeeper Five live a few times over the years and I’ve listened to their album, The Unbeatable Cry (2011) numerous times. I’ve always loved their sound. But The Stronghold solidifies my love for this band.

One of the most striking characteristics about this album, and the band in general, is the vocals. Lead singer Johnny Ott meticulously utilizes his voice as an instrument. At times, the vocals are booming, powerful, and occasionally angry, but other times they are subdued and beautifully delicate, all of it smothered in an Orbison-esque vibrato. This range in vocal style is carefully calculated to emphasize the lyrical content. For example, on “Balboa”, when Johnny sings, “I have thunder in each hand, neutron bombs in balled fists”, his voice grows stronger and stronger until he eventually sings, “I keep moving forward hit after hit” where the vocals trail off as if he’s close to giving up. But on the very next line, his voice grows stronger as he sings, “No, I’m not giving in.” Another great example of this is on “Bristol” when he sings “Southern winds do moan” with a whimper, but ultimately wails, “Come all-belt out a song”.

And the music is crafted just as carefully as the vocals, and skillfully played. The first track, “MadDog 20/20 no. 2”, starts off with howl, but the instruments fittingly mellow out when the lyrics kick in, “We stand alone, just a ghost of what we were, and that’s fine” right before the hollow-body guitar hits a haunting chord.  And “Frankie” begins with pounding toms and an ambiguous bass, offering up a feeling of anxiety. This sense of urgency is heightened and continues to build as a low piano chord is struck after each line of the verse, before ultimately arriving at a rousing chorus.

These are just a few of many examples of well-crafted, diligent songwriting that enhances every track. And with an army of guest musicians and vocalists, the music becomes even more profound. Overall the whole album evokes images of nostalgia and youthful innocence, cuts and bruises included, but offers up a sense of perseverance in the shadow of failure. These are songs that are immediately palatable, yet if you have patience, they get even better upon each listen.

Note: the album was originally released independently in 2017 with a slightly different track list.