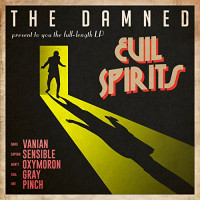 One of the most interesting things about the Damned is that they’re never actually what people want them to be. When English punk first bloomed, the foundational groups adopted respective uniform looks- the Sex Pistols were anarchic mad men, the Clash street-wise idealist, the Buzzcocks were lovey dovey mods… and the Damned were one mega-Stooges fan, a Keith Moon style drummer, a goofball that loved Pink Floyd, and a vampire. Of course, the follow up to the band’s classic debut was more psychadelic than pogo, and the third record was equally as apt to pull from the garage and circus music as it was three chord smashing. Despite everyone expecting that album to fail, when it was a smash, the expectations were that Damned #4 would just repeat Machine Gun Etiquette… and so, of course, the Damned released a straight up goth album (or almost) capping with a nearly 20 minute synth freakout.

And since then, they’ve shifted lineups more times than albums, pivoted between their influences and looking ahead, and doing what they want to do, not what the fans want them to do, which is, of course, why they’ve stayed interesting for 40 some odd years. Still, when Evil Spirits was announced, yet again, many a fan was hoping for Machine Gun part 2, especially in light that super producer and Bowie/Bolan/Lizzy super producer Tony Visconti was lending his talents.

And yet again, the Damned do exactly what they want to do, though, as always, there are hints of fan demand tagged here or there. At its core, Evil Spirits is the band’s tightest album since the early ‘80s, clocking in at a mere ten tracks. As is expected, the band uses Visconti trademark style and opt for a clean, vibrant, perfectionist sound. Each note here, from singer Dave Vanian’s “ooooooos” (which are astoundingly as rich and as smooth as they ever were) to Captain Sensible’s Nuggets meets Piper at the Gates of dawn guitar is manicured and spot on. It seems that the band wanted to create the hi-fi production sound of those mammoth glam records and they succeeded wildly.

The Damned have more or less constantly professed their fandom for garage, glam, and psyche music and that’s all on display here. Where some of us may have expected the charging pulse of “1 of the 2” or hot blast of “Love Song,” instead, the band reaches further back on tracks like “We’re So Nice” and gives a tip of the hat to both Syd Barret and Brian Jones. (The ghostly whispers and sounds is a great throwback to 1968 for sure). “Standing on the Edge of tomorrow,” a bolt of an opening track, slams forward, but with the finesse of the clean late 50’s rockers. Instead of wild abandoned, there’s confident control here.

While the entire album has homages to the earliest days of rock, and while that rainbow blood pulses through the album’s veins, it’s not a retro-record. Being the Damned, Vanian adds a slight menace and a lot of debonair style to every line, even when it seems he’s just having fun. Captain Sensible, a consummate music maniac to this day, can be spotted throughout the album riffing on classic ideas, dropping secret references there and here, and sometimes, twisting the reference into something new. That is, on stage, Captain almost always has a Cheshire cat grin and you can basically hear that same joy in the relish he takes in pulling out a riff’s full body and depth. (The spaced-out rising tones on the second half of “Look Left” basically summarize the Captain’s entire philosophy when it comes to Damning it up).Bassist Paul Gray is back after a long time away, and he slips onto the crew like an old glove. Just as this is a careful, polished record, Gray adds a similarly secure and professional backing , giving the album an every full, and every slightly spooky sound, as supplemented by the sometimes Steppenwolf, sometimes Bauhausian keyboards of Monty Oxy Moran and the alternating delicate and damaging drums of Pinch.

Perhaps new to the band, however, is their level of outspokenness. The Damned have usually squared their music to inter-personal issues, musings on mortality, or just whimsical ideas. But here, Vanian looks at the current state of Global politics, and makes a clear cut point: “This might be the last chance to make things right,” he admonishes on the opening track. The title track, with its Chuck Berry and Twink sonic mashup, could be taken to mean that as bad as things are, they’ve always been that bad… Vanian isn’t usually so pronounced as he has never seemed to be the kind of guy to shove his ideas down your throat- a genteel sort of man, one would think he’d consider such outspokenness rude. Still, as even Vanian has stated here or there, much of early rock was directly outspoken, having bloomed in the’60s (perennial Vanian favorite Love comes to mind) so this too is both a throwback and a step forward for the band.

Unlike some of their more wide ranging album, Evil Spirits is compact and focused. Instead of trying any new idea they might come across, the band, perhaps refreshed from the rather long period since their last album, has asked themselves, and not the fans, what the Damned are and have crafted a release that acts as much as a return to glory as it does a self-definition for the band.

The Cryptkeeper Five: The Stronghold