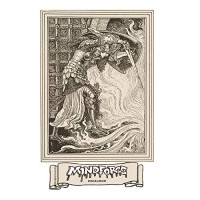 Poughkeepsie, New York’s Mindforce have garnered much hype in the hardcore end of things over the past few years. Their demo 7” on Cointoss, their split with Dead Heat, and their chaotic live shows have all elevated Mindforce into, well, a formidable force as representatives of modern hardcore. Excalibur, their debut full-length on Triple B Records, will most likely elevate the band to newer heights as the LP is a well-written and imposingly energetic release.

What Mindforce do better than almost anyone is meld together decidedly metal riffs with a heavier hardcore sound. This isn’t in the vein of, say, Power Trip or Red Death either. While I think comparisons are inadequate here, the best (and most obvious) one to make is to early Leeway. Make no mistake, Mindforce do what they do well and have their own sound. But the Leeway comparison is apt in that it gives context to a foundational vibe that Mindforce has. Their guitar leads and even many of the verse riffs have a huge metal influence, even in tone. But their vocals, lyrics, and overall vibe is still unmistakably hardcore.

Excalibur’s third track, “Nightmare,” stands out in its ferocious brevity. The opening chords pound at break-neck speed into an equally frantic verse riff that give the listener a good idea of how powerful the vocals are here. The doubled-over layered recording of the sung vocals is slick and adds to their potency. There isn’t screaming or guttural yelling, vocalist Jay sings and he does so with great energy. As the song chugs to its heavy-as-all-get-out breakdown, the choral lines are tailor-made for singing along. The breakdown itself is austere and without any metallic leads, opting for chopping chords that will certainly get the mosh going.

“Won’t Be Denied” is another standout on the LP. Interestingly, there is a hint of a hip-hop feel to this song. Not in a hokey or off-putting way either. The guitar work in the song is tremendous in that the riffs bounce between tightly-woven metal and choppier grooves that allow the vocals to come front and center. Similarly, the drumming here is well-written as the high-hat and snare help to balance the guitar work throughout the song. This is also a bit of a showcase song for some of the stronger guitar leads on the record. And like many of the other tracks on the record, the breakdown brings the entire song back to a truly hardcore vibe in both music and lyrics.

The LP’s two best tracks are “Fades Away” and “Excalibur.” Both songs are the best examples of how Mindforce is a highly capable set of musicians. Each song reveals a band that can maintain their compulsion towards hardcore fury while also writing well-structured and surprisingly melodic music. “Fades Away” has some wonderful vocal patterns and harmonies and is even ballad-esque at times, and “Excalibur” is easily the catchiest song on the LP. The guitar leads on the track are infectious as are the lyrics.

Excalibur is a great record. There’s really no two ways around that. It’s heavy. It’s dynamic. It’s angry without being too simple or derivative. The LP is easily one of the best of the year in the genre and is absolutely worth buying.