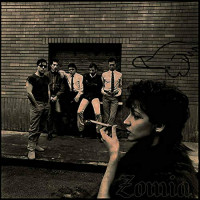 Before I begin, I feel that I should disclose my relationship with the band in question. Porcupine was the first act in my local scene I ever familiarized myself with. I’ve been playing shows with them for years, I’m personally friends with the members, and I even drummed for them on a short tour a few months ago. So, that said, this review will inevitably contain some personal bias. I typically refrain from reviewing bands I know personally for this very reason, and, for their past few releases, such has been the case with Porcupine. Previous output from the band hasn’t been bad by any means, but I found myself contemplating with every release, would I be reviewing this if they weren’t my friends? and coming negative conclusions every time until now. However, in the case of Zomia, I legitimately believe that Porcupine is worthy of all the praise I bestow in the following review.

Zomia is, without a doubt, Porcupine’s most innovative endeavor to date. These five songs see the band infusing their usual modern hardcore and metalcore-tinged stylings with influences from screamo, post-hardcore, post-punk, mathcore, classic hardcore punk, and even folk. The EP isn’t so much an exploration of cutting-edge sounds, as it is a melting pot of ideas from across the hardcore landscape, compounded in a fresh and inventive way. Perhaps the most striking example of the band’s organic implementation of stylistic diversity is the third track, “Masochist”. The opening riff’s simplistic dissonance isn’t strikingly distinctive against the backdrop of modern mathcore and metalcore cliches and the verse’s grooved out aggression has become par for the course in the nu-metal leanings of new age hardcore. However, as “Masochist” progresses, it begins to show more structural nuance and tonal variability than the relentless machismo found in many stylistically comparable acts. Vocally, the song is pretty presentationally static (aside from some occasional harrowingly passionate clean interjections), but the band effectively recontextualizes these deliveries from standard beatdowns into soaring post-hardcore passages with the auspicious momentum of acts like Touche Amore or Mewithoutyou. This seamless tonal evolution accentuates the emotional potency of the lyrics when the band finally drops back into a final climactic breakdown.

“Masochist,” as structurally audacious as it is, doesn’t even compare to Zomia’s erratic whirlwind of an opening title track. Clocking in at under two minutes “Zomia” tears through musical ideas without abatement, depriving listeners of any dead time in which to dissect what the hell is going on at any given moment. The track hints at some sense of organizational coherency with fleeting refrains, but the band blows by any and all repetition before it can even be recognized as such. “Bandit Gang Writ Large” takes a similarly linear approach to its construction. Any sort of “refrain” that could be identified in this song plays out more like a reprisal, despite its 45-second runtime.

Porcupine’s neglect of traditional pop song structuring plays into Zomia’s emphasis on momentum: both intercompositionally and as a whole. This is most audible in the transitions from “Bandit Gang Writ Large” to “Masochist” and “Dandelion” to “Self Reflections on Tacit Knowledge”. The latter is a breathtaking one-two of a finale. “Dandelion” is easily the most unconventional entry of the five. It’s a short stripped-down acoustic piece, which continues the emotion of “Masochist”’s conclusive screams, whilst completely contrasting its arrangements. This is also the first vocal moment on Zomia with a strong emphasis on melody and the operatic deliveries towards the track’s conclusion effectively set up the intensity of the EP’s six-minute closer, “Self Reflection on Tacit Knowledge”. “Self Reflection on Tacit Knowledge” reintegrates the theatrics of “Dandelion” into a meatier arrangement alongside the more conventional hardcore vocal stylings, found throughout the rest of the EP. This is where Porcupine’s screamo influences are most apparent. The dynamics of this closer feel very analogous to a band like The Saddest Landscape or City of Caterpillar. It’s an incredibly powerful sendoff to this short collection of songs and is consistently gripping upon repeated listens.

If I have any qualms with Zomia, the production can be a bit flat at times. This EP was completely self-recorded, and, despite this, there are quite a few moments in which the production really shines through, but this is offset by moments which indicate the potential to be more imposing. However, most of these critiques can be boiled down to nitpicks and the band’s songcraft and performances certainly shine through. I’m excited to hear this band branch out and come into their own stylistically and if Zomia is any indication of what’s to come, Porcupine is a band to have on your radar.