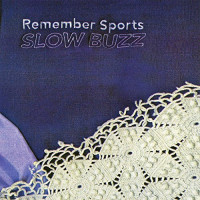 Remember Sports is one of the most fitting names a band could come up with because it really asks you to remember the band's former moniker, Sports. Known for their jangly style of indie/emo/power-pop, the record that stands out most from them is 2015's All of Something. But with the new album Slow Buzz, they've moved from Ohio to Philly, added in a lot of the city's soundscape and with a few new faces swapped in, cultivated one of 2018's most catchy and feel-good records.

Now, I say feel-good but just let me warn you, it's more of a breakup record than anything else and thematically, it follows its predecessor. But in terms of head-bopping moments, songs like "Up From Below" really leave you wondering if they set out to be a Superchunk tribute act. Because boy, they're fucking good at it. Don't get me wrong though, their attitude, spunk and overall identity is smothered all over, but these buzzy songs are where it's at. Even when it's all slow, toned down and saccharine too -- see "Making It Right" -- Remember Sports knows how to shift the ends of the spectrum and get it right.

What I admire about this album is you can sense the Ohio influence (throwing me back to Signals Midwest and the like) on tracks like "Dripping" and then the contrast to the Philly scene on songs like "The 1 Bad Man" and "Pull Through". Overall, with all these dynamics unfolding, if I did have to place a tag on them, I'd say somewhere in between Hop Along, Laura Stevenson and Slingshot Dakota (mad props to vocalists Carmen Perry and Catherine Dwyer who are well backed up by the rest of the band, but really come to the fore here).

Soft, acoustic, loud, fuzzy -- whatever approach Remember Sports adopts, it's one that works. Cheers to another versatile addition to the catalog and one that reminds me amid all these hooks, melodies and clashing styles, you really can actually smile at hearing how a break-up really fucks you up. Some filler in between, some songs just don't hit home, but overall, it's easily a must-listen to.