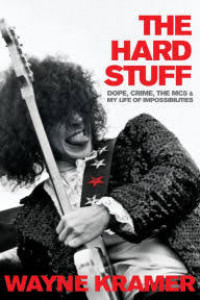 I’m a huge fan of biographies of aging punk rockers. (You’ve got to know your roots, kids.) I’m also endlessly fascinated by the tumultuous history of Detroit and its wonderful music. Wayne Kramer’s autobiography, The Hard Stuff: Dope, Crime, The MC5 & My Life of Impossibilities, scratches both itches. (Some might remember that The Hard Stuff was also the name of Kramer’s 1994 debut solo album for Epitaph.) This book is refreshing for a couple of other reasons. First - he doesn’t appear to use a ghost writer. The story is told in his own words. Second - the story has a happy ending. This is even more surprising given Kramer’s once very excessive rock and roll lifestyle.

Kramer starts at the beginning, with his childhood in and around Motown. I especially enjoyed his tales of running the streets of a safe and prosperous Detroit in the ‘50s and early ‘60s. His mother and alcoholic father split up when he was young, and he suffered abuse at the hands of his step father. His mother is presented as a complicated character, but ultimately as someone that he loved and respected. Music became his solace at a very young age. He goes through the process of assembling his friends to create the MC5. Starting in the mid ‘60s, the band had some significant success. Kramer gives us an unflinching look at both the highs and lows. The MC5 stuff alone makes this book worth the read.

Most will be interested to read about his feelings on MC5’s influence on punk, and his ‘90s albums for Epitaph. His thoughts on his time in federal prison in Kentucky on drug charges is also fascinating. He paints a vivid picture of the interesting characters he’s come in contact with along the way. He also gets into his happy ending. Eventually finding sobriety. Becoming a father late in life. Helping prison inmates through the Jail Guitar Doors program. (Joe Strummer wrote that song about Kramer.) He’s a guy you’ll like and want to root for. There is also a fair amount of wisdom to be gleaned. I read a lot of these things, and this is definitely one of the good ones.