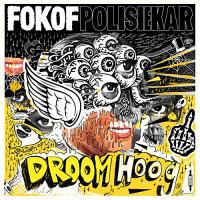 After a year of touring in support of their triumphant “come back” record, “Selfmedikasie”, South African punk stalwarts Fokofpolisiekar have released a follow-up EP, seemingly out of nowhere. While the self-reflective tone of “Droom Hoog” (“Dream High”) is a bit of a shift from the Afrikaner existentialism of “Selfmedikasie”, the record represents a natural progression for the band.

The EP kicks off with the toe-tapping “Ek Wens Ek Was Meer” (“I Wish I Was More”). It’s a driving pop ditty that documents the inevitable crises and freak-outs of middle age. The song also sets the pace for the rest of the EP: pop hooks all around, nothing too fast, nothing too heavy. The song makes a passing reference to “Die Illusie van Veiligheid”, a fan favorite from nearly 15 years ago.

From day one, FPK had demonstrated that they could write a solid pop song. Even their most rambunctious efforts could be boiled down to catchy little pop tunes. “Droom Hoog”, the next track, functions like a cheeky (yet still brooding) “Carpe Diem” response to the opener. With a slightly more optimistic outlook, front man Francois van Coke, reminds the listener that “God is groot, bier is goed, En die mense is mal” (God is great, beer is good, people are crazy”). The closing bars of the song show the band venturing back into more gruff, chaotic, punk territory, if only briefly.

“Wees Lekker ’84” keeps the ball rolling with more catchy cynicism. It’s an obvious head banger that could easily find its way onto the set list for their riotous live shows.

The smoother, poppier sound of the EP works well for the most part because the band’s song writing is strong enough to keep it interesting and they never, at any point, completely forget their snotty punk of their formative years. The tail end of the record does, however, drag a little as the speed slows down a bit more and the slick production takes center stage. “Maria (Jy hoef ni na my te luister nie)” (“Maria [You don’t have to listen to me])” doesn’t quite work as well as the previous tracks. There are some crunchy, bouncy bits that would make Weezer proud but the hook of the song is just a little syrupy.

The record closes out with a slow, plodding, melancholic, “Speel daai ou kak” (“Play the Old Shit”). Lyrically, the song is just as introspective and compelling (“Speel daai ou kak / dat ons kan jonk voel” = “play that old shit / so that we can feel young”) as the rest of the EP, but musically, it sounds a little too much like the “La la la” incidental music from “Gilmore Girls”. (Full disclosure: I’ve been watching lots of “Gilmore Girls” lately.)

Aside from a few missteps here and there, FPK are poised to turn their second wind into the most prolific and compelling era of their careers. Their connection to South Africa and Afrikaner culture is both loving and critical, but always profound. Their decision to sing exclusively in Afrikaans makes them one of the most unique bands in the world, even if their music can seem a bit familiar at times. “Droom Hoog” is a way to show that they are struggling and learning and growing up alongside their fans and not going away anytime soon.