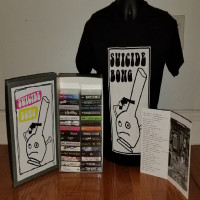 Having just crossed their sixth year, Suicide Bong Tapes have released a massive 30 tape box set encompassing the entirety of their output so far. The angle of the label is that they focus on Philly and make every tape limited to 100 copies only, excluding compilations. The cassette tape is often the disposable medium, trailing the now forgotten CD-R, and usually tapes are seen as “less sanctified than records.” For the past six years, Suicide Bong have countered that argument by making tapes that are specifically limited in order to make them artifacts and, more importantly, created with as much care and purpose as a 24 dollar platter. So, it’s fitting that the label has rounded up the last few copies of their first six years and have created carefully constructed, reverent box sets.

In Philly, the various punk scenes are pretty separate, with the factions rarely crossing over into each other, which is something of a shame. Suicide Bong is mostly anchored in the “West Philly” scene, that is bands influenced by hard and grimy hardcore as opposed to the “South philly” punk scene which is more indebted to classic era punk- not to mention the more artsy university scene-, but they quite wisely make moves to reach out beyond the ward. Maybe it’s to make the point that the rigid punk divisions in Philly are silly, or maybe they just like to put out good music. No Stayer is classic west Philly with D-beat hardcore bolted underneath some surprisingly ripping NWOBHM riffs. Likewise, Dopestroke leans towards the hardcore as well, with a substantial crust vibe ridding through their menacing atmosphere. But, to counter that, The Charley Few appear with a live album, paying unabashed tribute to early Oi, setting them squarely as a South Philly crew. Further twisting the knot, Janelle appears on a few different tapes, carefully walking the line between post-punk and pixies style indie. That’s not to mention the excellent Dark Web who wrap Devo-style paranoia around a Ramones bounce. Then there’s Retreevers who, with their jangly guitars and slightly country-twinge, are probably the best pop-punk band to come out of the city of brotherly love. And that’s not to mention Zorn, who appear with their debut tape and in their proto form as the Dolts, who follow in the fark vein of Ink and Dagger and cloak hardcore in a nihilistic vampiric vibe. It’s scary and it’s fun as hell.

The curators and fans of this collection may frown on the comparison, but the mere existence of the Suicide Bong seems to reference a certain Hellcat records mandate. Most of the bands here seem to have a certain reverence for a classic form of punk- first wave hardcore with atomic Cretins, early west coast punk with Trash Knife, Oi with Charley Few. Yet, like Hellcat bands, Suicide Bong bands pay tribute to those early genres not by aping them to a tee, but rather, taking the core essence of each of those styles and brining them into the current context, all while adding a certain special twist. Zorn’s coffin styles are for the books, as is Dark Web’s beer pounding, and Trash Knife’s ode to Rhonda Rousey.

Ever since Dischord records, one of the main virtues of punk rock is Document, Document, Document. The Suicide Bong box is more than a snap shot. It’s a detailed record of what happened in the city over period of time that gives light to many different aesthetics all while finding a certain thread that runs through all of them. Suicide Bong is sort of buzzy right now, with most of their tape release shows being packed to capacity- it’s with good reason. This music is damn good and damn unique, and Suicide Bong is able to walk the fine line between reverence and revelry without falling too far one way or another. Surely, this a landmark for other ground-level, DIY labels.

Can't Swim: This Too Won't Pass