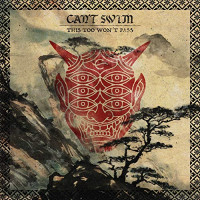 Can't Swim really impressed me with Death Deserves A Name -- let's face it, "Your Clothes" is a jam that no matter what genre of rock you like, its baseline and melody rip hard. When they followed up that EP with Fail You Again I felt as if something was missing, though. I know there were band additions/changes etc. but it lacked the rugged, grimy nature of the EP. However, the balance I think they were trying to go for is properly achieved on This Too Won't Pass -- proving that sophomore slumps really can be avoided.

Pure Noise Records has done a solid job of churning out pop-punk bands (a revival, maybe?) and here Can't Swim improves on the last record with catchier gang vocals ("What Have We Done?", "Congratulations, Christopher Hodge") and sharp screamo-segments, it's like you're listening to Finch. And that's what I love about this band, they bring that high-school feeling back in spades. There's even a strong Senses Fail drive here that makes you relive your emo-days when Victory Records and the like ran the game.

The emo/pop-punk formula stands tall on songs like "My Queen" as well, but when it starts to get a bit dirtier a la Alkaline Trio, that's where I think they find their true footing. "Amnesia" and "Daggers" are prime examples of this, with vocalist Chris LoPorto really adding a vulnerable dynamic like never before. He's less angry, more introspective and while it's more a breakup narrative, there's a sincere power with his gang shouting behind him on these new songs. It's a contrast that works well and which I hope they take further. I do think there are a few filler tracks that should have been cut, and had this been an EP it'd be perfect. As it stands, however, great work and I can't wait for more.