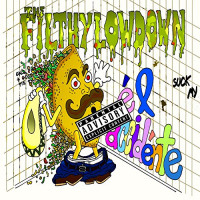 This is the second release that I’ve heard from Portland, Oregon based No Pants Records. Both bands happen to be from Pittsburgh too. Other than the fact that they’re both pretty good, geography is where the similarities end. City Escape Artist is a serious minded trio that asks big existential questions. I doubt The Filthy Lowdown would be serious if you put a gun to the quintet’s collective head. The colorful artwork on El Accidénte gives us some idea of what to expect. It’s a taco man on the giving end of a gloryhole. Yes, you read that correctly. The inside art is worse and will make your teenage son giggle and your mother blush.

Musically, The Filthy Lowdown is on the thrashy end of the punk spectrum. They most remind me of a couple of fairly obscure crossover acts, Excel and later era Wasted Youth. (I also acknowledge that they’ve probably never listened those bands, who were both likely broken up before the guys in The Filthy Lowdown were even born.) Sometimes I hear something like a goofy Anthrax mixed with maybe the Dwarves. It’s fast and and funny with catchy choruses, big hooks, chunky riffs and lots of guitar solos.

The Mexican title and cover art would seem to reference the two song cycle of “Tijuana Chronicles” and “Somebody Hit Somebody”. “Somebody” might be the best song on the album. Other highlights include “Don’t Wear Yourself Thin”, “Sex Owl”, “Serve Dinner In Hell” and “Hydroplane”. Overall the lyrics on El Accidénte are fairly juvenile, and mostly right up my alley. The lead vocals are half sung and half shouted, and there are plenty of gang vocals too. I bet The Filthy Lowdown is a ton of fun to see live.

The first and last of the 15 song are more like comedy bits. The problem with that is that they’re funny once or twice, but you’ll probably want to skip them on subsequent listens. That being said, the band has the rare ability to feel loose without being sloppy. The Filthy Lowdown obviously don’t take themselves too seriously, but they’re good at what they do. What they do is write catchy, funny songs that you’ll find yourself singing along with. You may feel a slight sense of shame, but you will sing along anyway.