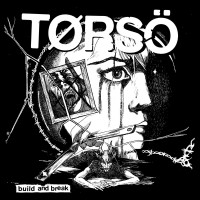 The band feature ex-member(s) of Punch, who were one of the more versatile and competent bands of their kind. While Tørsö is less “hardcore mixtape” and more streamlined, they play with that same level of professionalism without losing an edge, while retaining some great energy to boot.

In the past, there’s always been talk about a heavy D-beat influence on their sound, but it’s not terribly obvious aside from the stray metal lead; I guess I hear it a bit on the title track. I’m not exactly a scholar on that stuff, mind you, but Build and Break still skews much more Poison Idea in spirit than Discharge to my ears (maybe that’s splitting hairs). The band seem to play best at an accelerated pace, but when they slow it down some for a cut like “Repulsion”, it’s a nice change of pace. I’ve only got lyrics for “Grab a Shovel”, but expect at least one tastefully worded take on self-loathing.

The highlight here is definitely the catchy and cathartic second half of “Grab a Shovel”, but Build and Break as a whole is a real solid EP without missing a beat, and a considerate refinement of Tørsö’s sound at that.

Lisa Marr with The Tranzmitors [7-inch]: In The Summer