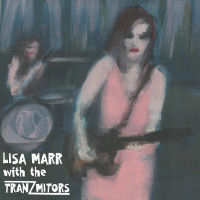 Lisa Marr with The Tranzmitors [7-inch]

For those who might not be aware of who Lisa Marr is, she was one third of the quirky pop-punk trio Cub which was around. I’m not really sure of what she has been up to in recent years but this single finds her teaming up with The Tranzmitors (who include members of The Smugglers and New Town Animals) ostensibly to cover tracks by the aforementioned Cub and Seattle’s masters of pop-punk, The Fastbacks, along with offering up one original song. It’s an interesting concept to set yourself up as what is essentially a covers band for a first release but with Marr covering her own band that makes it even more intriguing.

There are four tracks on the single and I’m going to address them in order of my preference.

“Magic 8 Ball” by Cub – this is my favourite Cub track so I’m pleased that it’s included her and equally pleased that it’s given a new lease of life with a punchier delivery than in its original form. There is no doubt that having Lisa Marr on board makes this less of a surprise than if another band had covered this song

“In The Summer” by The Fastbacks – this is full of perky pop-punk goodness, and has a really good feel good vibe. It’s got a slightly cleaner guitar sound that the original but still does the job and I must say that I think that the vocals on this version are superior to that original effort.

“Pretty Pictures” by Cub – another ray of sunshine in this grey and dull time of the year. Marr certainly does have a voice which warms the heart and is perfect for raise spirits.

“Salvation” – this is the only original song on the record and it might come in last in my order of preference but that is probably down to the fact that I’ve been more familiar with the other three tracks from their previous existence so they have a head start in terms of making an impact. It doesn’t stop this track continuing with the uplifting feel which imbues this record.

This single is linked to the Seattle Pop Punx Festival being held in January 2019 and which will also serve as a record release show for Lisa Marr with The Tranzmitors. This is probably one of the reasons why the covers exist, as they pay homage to some great tracks that came out of the North West of the U.S.A and the South West of Canada. To keep that whole scene based feel to it, the art work for the single is provided by Jean Smith of Mecca Normal and all profits from the release will be going to the Girls Rock Camp Vancouver.

A damn fine release and one which really does contain a sense of working together within a music scene and that scores highly with me.

One Step Closer: From Me to You