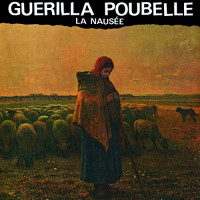 At a glance, La Nausee, the most recent album by Parisian punks Guerilla Poubelle, is a dark, angry record. Even the cover art has a bleak and lonely tone. But digging deeper, the listener is taken on a trip that paints this crazy world with a touch of hope and unity. All 13 songs, sung in French, offer some sort of social commentary, not necessarily as a complaint, but rather as a somewhat shocking lesson that life could be better.


Lyrically, many of the tracks are influenced by literature and philosophy. “Je Ne Possède Que Mon Corps” (I Have Only My Body) and “L’aventure de L’ordinaire” (The Adventure of the Ordinary) are inspired by La Nausee, a novel by existential philosopher Jean-Paul Sartre. The latter tune references the main character’s melancholy life upon returning from an exciting journey, while the former touches upon the everlasting connection between land ownership and freedom. It begs the question: “Am I truly free if I have only my body?”

Some of the songs are influenced by current affairs in France as in tracks like “Ceux Qui Ne Sont Rien” (Those Who Are Nothing) and “En Marche”, both of which are critiques of President Macron’s policies. While others are influenced by more universal issues like gender identity (“Identite Rigide”) and a woman’s right to choose (“Les Fils Et Les Filles Des Sorcières Que Vous N’avez Pas Brûlées”).

Sonically, the music perfectly matches the lyrical content. The vocals are aptly rugged, loud, and combative, while the music is generally fast and aggressive though the band does a good job of mixing up the tempo. Despite the angry tones of the music and vocals, there is no lack of melody on this record. The singalong moments typically come in the form of a chorus and despite my ignorance of the French language, these moments are pretty catchy.

I liked this album the very first time I listened to it. And I liked it even more as I learned more about it. It is intelligent. It is poetic. It is dark. Yet, there are still moments of humor, hope, and solidarity. Possibly my favorite line of the record comes from “Plus Je Connais Les Hommes Et Plus J’aime Les Chiens” (The More I Know Humans, The More I Like Dogs). It pretty much sums up the album and, roughly translated, it basically means, “If I die tomorrow, bury me deep so the archaeologists of the future don’t know that I was hanging out with you all”.