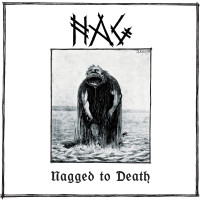 This Norwegian trio makes one hell of a gut rumbling noise but manages to do so in a way which isn’t one dimensional and subsequently boring. This is a combination of crust, punk, hardcore and metal and all elements come to fore throughout the album, blended in a way which generally keeps me nodding my head at a steady pace from start to finish.

The opening track, “Sigh”, hits hard like a pneumatic drill and the guitar really grabs me by the shoulders and shakes me as it has a sound that immediately finds favor with me and provides me with a focal point as I listen to the album. The vocals are guttural, yet without being indecipherable although they do seem to be a low in the mix, allowing the music to be more impactful.

There are a handful of standout tracks on here including “The Story of My People” which contains some excellent guitar riffage and a pummelling rhythmic attack, alongside the most effective vocal performance on the album. This is a real barnstormer of a track. “Dumb Little Life” is also one that needs highlighting, primarily for the cutting guitar that slices its way through the song with a razor sharp quality. However good these two tracks are, both can’t hold a candle to “Black Wizards” which is head and shoulders above anything else on this album. The guitar intro bites away with jagged teeth before the song erupts into a pleasurable aural attack. This is the song which has more of a hardcore edge to it, and it certainly kicks ass.

Within the varied song structures I was surprised to hear some almost religious chanting, along the lines of what one expects within a Crusades album, adding some light to the darkness that is at the heart of what NAG does.

What struck me as I listened to this is how it never seems to be out of control. There is definitely a sense of outrage and defiance, which some bands often lose in a blur of speed but NAG manages to keep the delivery tight without becoming repetitive. I’m very picky when it comes to anything that might have a crust/D-Beat persuasion, but this record is one which hits the spot for me.

Mineral: One Day When We Are Young: Mineral at 25