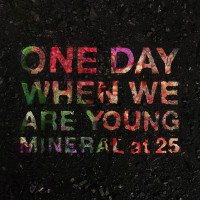 If you're an emo fan like I am, then Mineral putting out new music in 2019 is something you probably still can't wrap your mind around. In the annals of the genre, this '90s band is considered a forefather, and as we all know, a band that came and went too soon. But come One Day When We Are Young: Mineral at 25, it's more than just a couple of songs to walk us down memory lane. Don't get me wrong, it's nostalgic but the book that accompanies it (written by Mischa Pearlman) is something that transports us right into the band-room of the present and gives us insight into teens-turned-men, lovers-turned-fathers and gentlemen that are older, seasoned yet seemingly better for the wear.

Into the music first, I implore you to pick this up on vinyl so you can indulge in all the intricacies that make Mineral... well, Mineral. Stylistically, these songs marry the best of The Power of Failing and EndSerenading so well. They feel like the perfect mix of a band fiddling and guessing, getting it right, and then having to recreate the successful formula again and again. Take "Aurora" for example, slow-burning yet a beautiful guitar-winding jaunt that bears their signature slow/loud/crescendo dynamic. Then comes "Your Body Is The World" -- a more mid-tempo jam that reminds me why they hold Elliott Smith as an influence and then taught so many bands in their wake on what earnest, vulnerable and soulful music should be. Trust me, you couldn't dream up any more perfect a duo of tracks to reignite the fanboy-ism, and as someone who dealt with several deaths last year, nervous breakdowns, panic attacks and is now redefining my very own concept of love, the effect today at 33 is the same as when I was 16.

What I adore about these songs is how they really reflect that while you're older, it's still always good to remember your younger days when you said or did shit you might be ashamed of. Or when you were cheesy as fuck. These tracks are all about helping you recover pieces of yourself that you didn't know were so formative in the first place, and emphasising you shouldn't discard them. Fuck up, err, make mistakes... but learn from them.

And these themes barrel into Pearlman's book. It's not just a Mineral documentary in terms of why the breakup came just when success drove their way in the '90s through an Interscope record deal. It's more than asking who was bitter, how did solo careers turn out and the usual drivel. Pearlman burrows deep into why they didn't feel Mineral had heart anymore, when clearly they did and, wades further into how their popularity rose with the digital and social media age. Hearing Jimmy Eat World's Jim Adkins, the likes of Tim Kasher, Frank Turner and MCR's Frank Iero wax on, you can tell it's more than just powerful lyrics or Tumblr hipsters and such. Mineral was a state of mind that carried on like a torch for years, that angst we all have and never lose. There's no ego or narcissism, and that's why the perspective -- not just from artists, the labels, the PR people, the folks who got their music flowing -- but from their spouses of today matter.

It's less a melodramatic nosedive, and more an introspective look into roads never walked. I love how we see more of a band that really doesn't hinge on whether it could have made it and had that mainstream success. Not to mention, it's brilliant reading the Get Up Kids and their like pay tribute, while making it clear Mineral's a movement that transcended fucked-up "emo" labels or reviews that bashed them from Pitchfork and such. As Turner said, they inspired people across oceans and brought folks from Asia and Europe (and wherever they'd tour) to Texas in terms of mindset (heck, even physically at times). Most of all, I appreciate the context Pearlman places when Mineral is juxtaposed to the likes of The Promise Ring, Boys Life, Christie Front Drive and Texas is the Reason etc. You see where Mineral's place was/is/forever will be in this wave and that no matter what we say, there can never be a revival that encapsulates this magic.

My favorite part of all, though, is reading everyone's thoughts on "Parking Lot" -- the flawed beginning, the engineering/production problems you picked up, the tape hiss and overdone feedback/reverb -- and how imperfections turned out to be most pristine in the way they sang and played; something these new songs capture too as they're as polished, yet as Mineral as ever.

Shockingly, the biggest takeaway is that the band admits they're not back together. Just like tours, this is a one-off and they don't know what the future holds. But in a year where American Football is dropping another LP, hey, us emo-fanboys can dream, right? Let's be real, the world could do with a lot more Mineral right now.