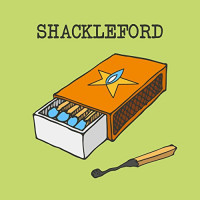 Shackleford is a 4 piece band hailing from Nuneton, that has been together since 2014. They just released their new, 4 song EP entitled Shackleford II, this past December of 2017. Upon first listen, I hear a lot of melodies that remind me of the late Tony Sly. One can look no further to what I think is the stand out track on the EP “Blue Tip Matchsticks” to hear it. This is an excellent introduction to the band, as well as the opening song Dopamine, which the band has released a video for. Hopefully in the future we can see more in that department, as the passion and enjoyment of the band playing shines through, not only in the video but on the EP.

Their influences and biography list Jawbreaker and D4, but I can definitely hear more of a MxPx & No Use for a Name influence, which is just fine by me. All in all, this is a solid release from the band, and I am excited to hear what they come up with next. If you are older like me and want to go back to the mid 90’s melodies galore in your punk rock, Shackleford II is a fantastic jumping off point.

Mineral: One Day When We Are Young: Mineral at 25