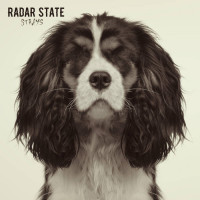 Josh Berwanger is easily one of the most underappreciated artists in music today. His first band to really catch traction was The Anniversary, an amazing band that put out two brilliant albums that could not possibly have sounded any less like each other. Their first album, Designing a Nervous Breakdown, was a synthpop/emo album, while the follow up, Your Majesty, was more of a Beatles-esque affair. Unfortunately, there were lots of rumors of discord in the band, and their live shows felt like the work of a group of people who really disliked being together. The band folded after two LPs, but Berwanger made off with The Anniversary’s rhythm section and created the alt-country band The Only Children, who released another two excellent albums to virtually no acclaim. After The Only Children, Berwanger went solo and became even more underappreciated and unnoticed than he was with either of his bands. So the formation of Radar State excited me because Berwanger, teamed with both of the lead singers from The Get Up Kids, was likely to finally get some of the attention he rightfully deserves.

The album really bangs out a number of super catchy pop tunes like “Summer of Sundays,” “Damn the Man,” “Making Me Feel,” and “Artificial Love.” These are three songwriters with exceptional skills in writing great pop music, and this is an album that’s easily going to get stuck in your head. The only ballad is the final track, an excellent Berwanger number called “Play for the Game.” The only somewhat negative thing I have to say about the album is that Berwanger’s voice, which worked so well in his other two bands, is a bit of an acquired taste when mixed with this Replacements-style pop-punk. It took me a little while to get used to it on tracks like “Damn the Man,” but soon enough I moved past it and I was hooked. The worst of it comes on a Suptic song, “Making Me Feel,” where we learn that Berwanger should never serve as a backup singer, as he nearly ruins the catchiest song on the album with his off-kilter ooh-la-las in the background.

I’m going to catch hell from some people for focusing on Berwanger in this review, which is fair because Radar State really is a group effort put forth by three frontmen who put in equal work on the project. But I’ve written about Pryor and Suptic and The Get Up Kids a few times before and, while I loved their new EP last year and eagerly await their inevitable LP on Polyvinyl, on this release I’m most excited about Berwanger because of how underappreciated he’s been for all of his career. Still, I want to emphasize that this is a great album all around and a must-listen-to for all fans of all three singers. Strays is the reunion album we never got from The Replacements during the last time they got back together, channeled through three of emo’s greatest songwriters, and really the first great album of 2019.