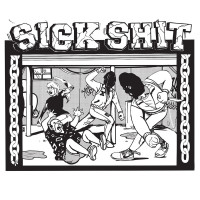 Given to the hardcore community like a present from Santa himself, Sick Shit quietly put out EP 2018 on the morning of Christmas. The EP dropped on the three year anniversary of the band debuting their first song and was released as a gift for fans according to their social media accounts. Sick Shit had much to celebrate in 2018 seemingly breaking out to a wider audience and demand of attention. It appears from liner notes found on the release’s Bandcamp page the songs were taken from a discarded full-length.

EP 2018 opens up with a tense and twangy ambience before dropping into “Gristle.” The hi-hat smashes direct a guitar riff into a frontal assault from the band led by vocalist Sami Kaiser. The metallic guitars crunch along until collapsing into a nasty rock influenced riff. It ends with Kaiser screaming, “Don’t be scared / Don’t be scared / To think / Prioritize your needs.” Second track “No Face” immediately blasts off with double time drums sounding like We’re Down Til We’re Underground-era American Nightmare. Halfway through, Sick Shit pepper in industrial sounding elements in a drum led breakdown. Closer “Shut Up Get Fucked” continues much in the same vein.

Raising more questions than answering, one has to wonder why they scrapped this full-length session. The songs here show promising growth from the smattering of EPs Sick Shit has released. It does a great job incorporating rock-centered riffs into their hardcore and demonstrates obvious progression. Sometimes the best gifts are the unexpected ones.