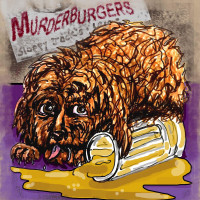 January is usually review catch up month. It’s normally a slow time for new releases, so we can go back and hit some of the things we missed from the previous year. The roots of this review actually go back farther than that. City Mouse’s Get Right was actually one of my very favorite records of 2018. I probably listened to it once a week. The problem is, it came out toward the end of 2017, and I didn’t get ahold of it until the very end of the year. By then it was too late to get a timely review in or include it in my 2017 end of year best of list.

I vowed to right that wrong by reviewing their 2018 split with Murderburgers, and then I again failed to get the seven inch until too late in the year. Oh well, I guess it’s better than never. This City Mouse/Murderburgers split was released on It’s Alive/Brassneck Records just in time for the bands’ 2018 joint European tour. It’s got two catchy new tunes by each trio on pink or green wax. The front and back cover art is the band leaders, Miski Dee for City Mouse and Fraser for Murderburgers, portrayed as dogs.

The dozen tracks on Get Right packed a significant emotional punch. While that level of intensity can’t be matched by only two songs, the Lansing, MI based City Mouse comes awfully close. “Bullets” seems to retell the harrowing story of a friend be gunned down by the police. “Grave 13” is even heavier with lyrics like “I don’t wanna fill your grave/I just wanna pop in whenever I want to” and “In the parking lot of the bar we called home/They had a car wash to pay for your funeral”. Pair those words with Dee’s expressive voice and crunchy guitar and you’ve really got something. She continues to write memorable, significant songs on the ragged edge of pop punk. Hopefully we get some new material in 2019.

I’ve never been a big Murderburgers fan. I’ve generally found the Scottish band’s brand of pop punk to be a bit sugary for my tastes. That being said, I enjoyed their side of the record too. On “All I Think About Is Sleep” the band gets some vocal assistance from Bad Cop/Bad Cop’s Stacey Dee. The other song is a respectable cover of Teenage Bottlerocket’s “Wasting Time”. The two bands have enough in common to make these four songs feel cohesive. I would definitely recommend this record to fans of either group.

Tiny Moving Parts: For the Sake of Brevity [7-inch]